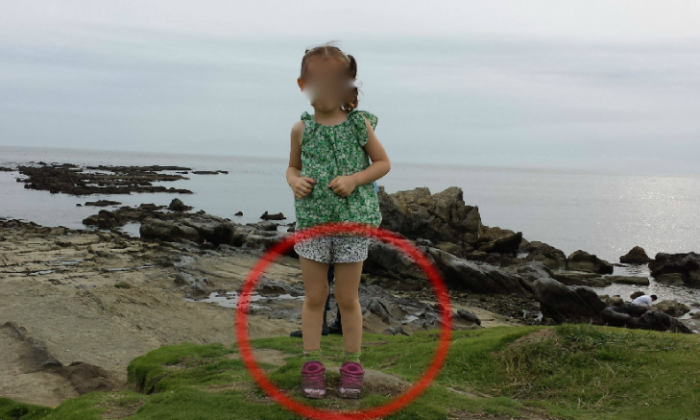 Photo: What’s Behind This Girl on the Beach?

A father became disturbed after he noticed a picture of his daughter contained what appeared to be a ghost.

Martin Springall took the picture of his young daughter in Japan, in Zushi in the Kangawa prefecture.

Nobody was around the pair when Springall took the picture and four others, since his daughter kept making funny faces. Springall insists that it’s also not photoshopped, and that no one was standing behind his daughter; she would have noticed and scurried away because she’s shy.

A friend of his uploaded the picture to Reddit, where many users believe that a Samurai ghost appeared behind the child since the beach the dad and daughter were on was across from a samurai graveyard.

“My daughter thinks the whole thing is just so funny,” Springall told ABC News. “She thinks it’s a ghost, but not a scary ghost—a nice one.”

The picture was taken in the summer of 2014, when the family lived in Tokyo. They now reside in Toronto, Canada.

“I have no idea what the boots are, where they come from or what they could represent. All I can tell you is that I totally get the cynicism … If I saw that online I would view it exactly the same way,” he added to the Daily Mail.

“I can assure you, though, that it was just the two of us in the area and the photo is 100% untouched.”