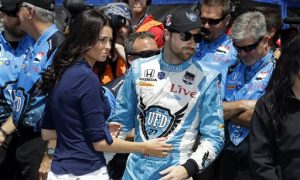 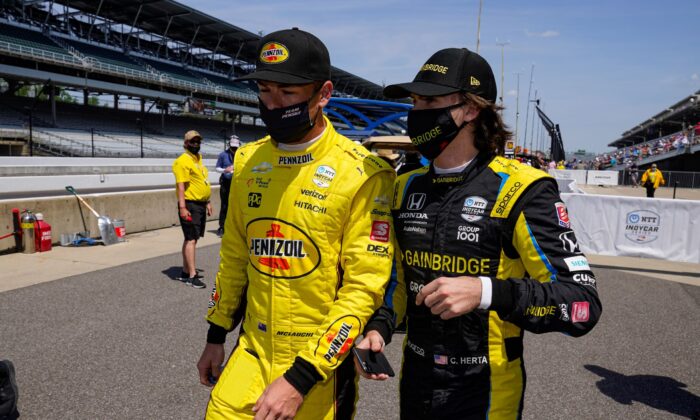 Scott McLaughlin, left, of New Zealand, and Colton Herta walk out of the pit area during practice for the Indianapolis 500 auto race at Indianapolis Motor Speedway in Indianapolis on Thursday, May 20, 2021. (Michael Conroy/AP Photo/)
US News

The track opened as scheduled for practice and defending race winner Takuma Sato slowed alongside Indy 500 teammates Graham Rahal and Santino Ferrucci for a three-wide photo opportunity on Indy’s frontstretch.

McLaughlin saw the three RLL cars had slowed to a crawl ahead of him and adjusted his speed accordingly as he drove through the fourth turn. But Herta was completely unaware and had to quickly dive inside of McLaughlin alongside the wall to avoid a full collision.

Both Herta and McLaughlin immediately returned to pit lane for repairs, with Herta estimating he’d miss at least an hour of practice.

“I’m doing 220 [mph] and coming through the corner and these idiots are doing 170, it’s just ridiculous,” Herta said.

McLaughlin spoke with Herta, who viewed a replay and saw that McLaughlin and Simona deSilvestro had slowed ahead of him because of the Rahal cars.

“The Rahal dudes were trying to get a nice little photo and I just checked up, and Colton came through and he caught me very quickly and it’s hard to check-up,” McLaughlin said. “I don’t really know what happened. It’s the first lap of the morning.”

IndyCar said it was reviewing the incident and did not rule out possible penalties against the Rahal team. RLL did not immediately respond to a request for comment.