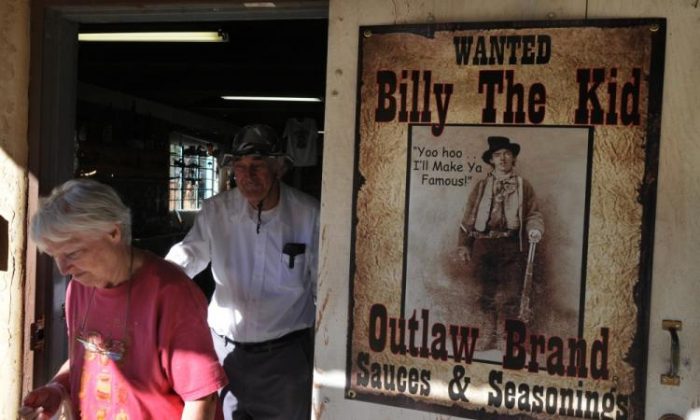 Photo of Billy the Kid Bought for $10 at Flea Market

A photo of famed outlaw Billy the Kid was purchased for $10.

Experts said that the photo—bought at a flea market—shows the outlaw standing near a lawman who would eventually shoot him.

Sheriff in photo with Billy the Kid is likely his killer: experts https://t.co/JTosLkISbb

The image was taken in August 1880 and shows him with a gang of men, including Sheriff Pat Garrett, Billy the Kid’s former friend who later killed him, MailOnline reported.

The rare picture was bought by history buff Frank Abrams, of North Carolina, according to WNCN.

“I said, ‘Oh my gosh, he looks like Pat Garrett,’” Abrams said after he started researching the image.

“It’s incredible. … Five trips across the country, forensic experts, professors have looked at it, others have looked at it. … It’s … I’m ecstatic. I feel like one of the luckiest people in the world. To find this is a privilege,” Abrams said.

He said that the picture includes another outlaw, Dirty Dave Rudabaugh, who was captured alongside Billy the Kid.

The only known picture of Billy the Kid, a gunfighter from the American Old West. It sold for 2.3 million dollars. pic.twitter.com/KUDcbH34jS

But the photo could be worth millions, based on a prior sale of a Billy the Kid photo.

In 2015, a photo of Billy the Kid, whose real name is William Bonney, playing croquet sold for millions. It had been originally purchased for $2. “I had just a couple of bucks left, and I found three photographs I liked, and of the three, the oldest tintype, I actually kind of chucked it back in the box,” collector Randy Guijarro said at the time.

A two dollar photo turns out to be the first photo of Billy the Kid. He's at the left edge of the house. Pic now worth five million pic.twitter.com/3JuRaaTVPt

But Abrams’s photo might be worth quite a bit more than even that because it shows the outlaw with the man who shot him.