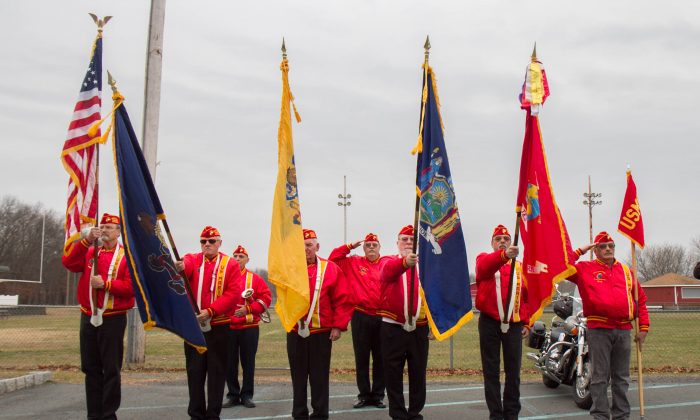 The Gung Ho #909 Detachment of the Pike County Marine Corps League at a Wreaths Across America ceremony in Veterans Memorial Park in Matamoras on Dec. 13, 2015. (Holly Kellum/Epoch Times)
New York

MATAMORAS/GOSHEN—What began as a good use for a surplus of wreaths at Worcester Wreath Company of Harrington, Maine is now a tradition that spans states and continents. In 1992, owner Morrill Worcester donated excess wreaths to decorate graves at Arlington National Cemetery in Virginia to honor the men and women who served their country. After a photo of the garlanded graves went viral online, more and more people joined in, eventually covering all the graves in Arlington and expanding into a non-profit called Wreaths Across America. In 2014, the organization laid 700,000 memorial wreaths at 1,000 locations in the United States and beyond. The wreath-laying is usually held on the second or third Saturday in December, and on Dec. 12, simultaneous ceremonies were held in Matamoras and Goshen. Another one is scheduled in front of the Orange County Court House in Goshen on Dec. 19 at 10:00 a.m.