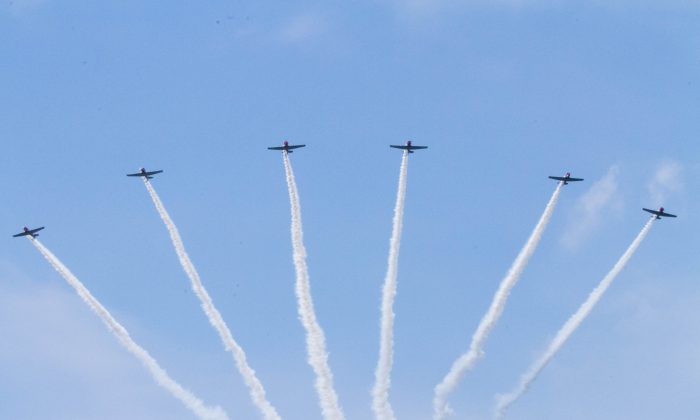 The Geico Skytypers flying in formation with smoke trailing behind them at the New York Air Show on Aug. 30, 2015 at Stewart International Airport in New Windsor. (Holly Kellum/Epoch Times)
New York

NEW WINDSOR—The New York Air Show brought tens of thousands of people to Stewart International Airport over the weekend to watch a lineup of aerobatic pilots, parachuters from the West Point Parachute Team,  New York’s Air National Guard 106th Rescue Wing, and a wide range of planes on display along the runway.

While the weather was mostly sunny, the event was overshadowed by the death of aerobatic pilot Andrew Wright on the Friday before the show. He was  “an outstanding aviator and a great friend to the air show community,” the announcer said during the show. “God speed and blue skies.”