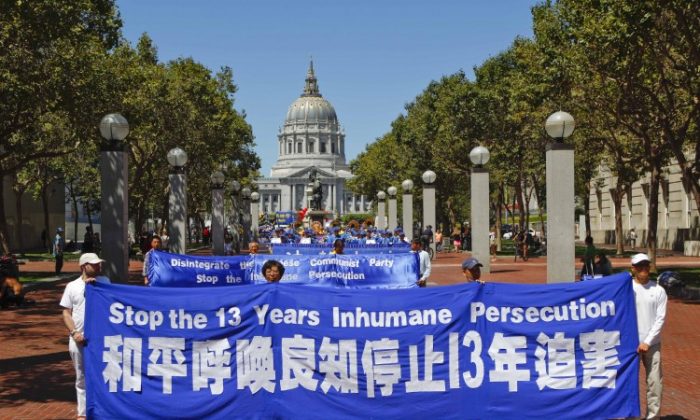 The scene at the end of the Falun Dafa parade in the heart of San Francisco's Chinatown, Portsmouth Square, on July 21. The parade served to mark July 20, which was the 13th anniversary of the beginning of the persecution of Falun Gong in China. (Li Ming/The Epoch Times)
US

SAN FRANCISCO—This July 20 marked the thirteenth anniversary of the beginning of the Chinese Communist Party’s (CCP”s) campaign to eradicate the spiritual practice of Falun Gong, also known as Falun Dafa. This past weekend, Falun Dafa practitioners held several events in San Francisco to memorialize the victims of that persecution and to rally support for opposing it.

Falun Dafa was first publicly taught in China in May, 1992. It involves practicing five sets of gentle, meditative exercises and living according to teachings based on the principles of truthfulness, compassion, and tolerance.

The practice spread very rapidly in China, with the state estimating that by early 1999 between 70 and 100 million people were practicing it. The popularity of the practice and the prospect of the Chinese people preferring the teachings of Falun Gong to communist ideology scared the then-head of the CCP, Jiang Zemin, who ordered the persecution.

On Friday night hundreds of practitioners gathered for a candlelight vigil opposite the People’s Republic of China Consulate on Laguna Street to remember those slain in that persecution.

According to the Falun Dafa Information Center, over 3,400 practitioners have been confirmed as having died from torture and abuse, although the center fears the actual number is in the tens of thousands. In addition, investigators estimate in the years 2000–2008 62,000 Falun Dafa practitioners were killed by having their organs harvested, according to the journal CQ Global Researcher.

On Saturday, July 21 over 300 Falun Gong practitioners gathered at the San Francisco City Hall. After practicing the five sets of Falun Dafa exercises a grand parade got on its way from City Hall and proceeded on Market Street, through the downtown shopping district and Union Square, looping through Chinatown and ending at Portsmouth Square, the heart of Chinatown, where a rally was held.

The parade included: the more than 100 strong Divine Land marching band, which played traditional Chinese and Western pieces; a group of about 30 children in traditional yellow exercise uniforms demonstrating the 5 sets of exercises; a group re-enacting the torture methods used by the Chinese regime on Falun Gong practitioners; and a group that supports the Chinese people who have quite the Communist Party. Throughout the parade there were large and colorful banners and posters.

There was also a group dressed in all white who held pictures of Falun Gong practitioners who were tortured to death in China. They were led by two teenage practitioners who carried a placard with the Chinese character that means “In memorial.” One of the two was Miss Alexandra Kitze, 13, from Mill Valley.

“It’s good and important to get the word out about what is happening in China and how someone who would do these things to innocent people is evil,” Miss Kitze said. “As I was marching in the parade I thought about how this was helping me and the spectators connect with the Falun Gong practitioners who got tortured to death and the practitioners who are still in jail and facing death.”

Alexandra’s father has also participated in the parade. Mr. Chris Kitze, 53, an American entrepreneur who founded Xoom.com, an early dot-com company that provided e-mail and chat and was the 13th most popular site on the web when it went public in 1998, a year before the persecution of Falun Dafa began in China and 9 years before Mr. Kitze would first take up the practice of Falun Dafa.

“I’ve lost weight and I’ve increased my mental and physical endurance tremendously. The worries of the world that used to keep me awake at night just don’t affect me anymore,” Mr. Kitze said.

Before the parade started, The Epoch Times caught up with Jenny Zhang, 33, who arrived from China just one month ago, and was later to speak at the rally. Jenny started to practice Falun Dafa in 1994 and was a senior at the Changchun University studying biotechnology in 1999 when the persecution started.

When she heard on July 20 that police had started to arrest Falun Gong assistants she decided together with her parents and sister to go appeal at the Changchun appeal offices for a stop to the arrests. All of the practitioners who showed up to appeal were all arrested and taken on a big bus to a nearby stadium where they were kept overnight.

“I want to tell people the persecution in China is really wrong, that we are nice people. Practitioners lost their jobs and careers,” Ms. Zhang said. “I was kicked out of school in my senior year right in 1999, only because I practice Falun Gong, and was not able to complete my education even though I was so close to graduation. My mom was a professor in university, and her pension was suspended because she is a practitioner.”

Ms. Zhang is optimistic for the future. She feels the situation in China is changing, and that many people realize the persecution is wrong.

“When I was in Changchun and took a taxi, when we paid him we used the bills that have written on them, ‘Falun Dafa is good,'” Ms. Zhang said. “The driver laughed when he saw them and returned the change in bills that also had hand written on them similar things. He said that he is not a Falun Gong practitioner, but he knows it is really good. He is also using these bills as it will bring him good luck. Things are definitely changing.

Asked whether she is familiar with the beating of Falun Gong practitioners in San Francisco’s Chinatown and with the hate crimes that have taken place here, Jenny replied that she is very familiar as her sister was one of the victims.

“We think we come to a free land and that we are free to practice our beliefs, but it seems the CCP brought their persecution here. To be frank, I am also a little bit afraid of my safety here. They were just holding a board showing people what happens in China. If I do the same thing, will I get attacked myself? I am asking that question myself. So, I feel a little unsafe.”