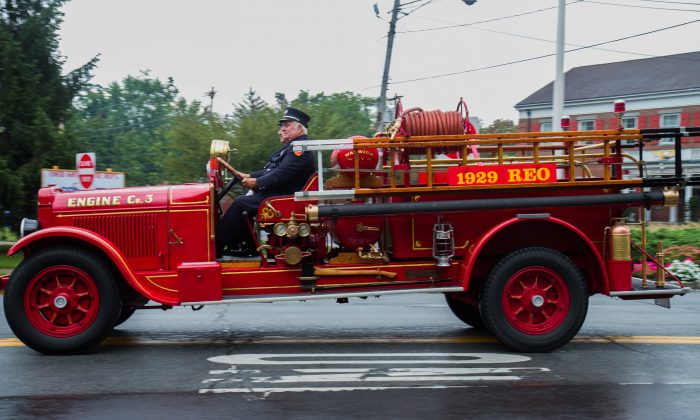 The side of a 1923 REO fire engine from the Warwick Fire Department in the Triennial Fire Parade in Goshen on Sept. 12, 2015. (Holly Kellum/Epoch Times)
New York

GOSHEN—Despite the drizzle, and at points, downpour that accompanied the triennial Fire Parade in Goshen on Sept. 12, the show went on.

The parade was led by the Goshen police and followed by a range of firefighting vehicles. Last came the floats, followed by a few straggling fire trucks.

First division marshal, William Zoppie, said he had marched in pouring rain before and it wasn’t going to keep them from doing it again this year.

“With all the preparation and everything else, and preparation by the other departments … you can’t turn them away,” he said.

Parade judge Hank Brisky said it did deter some from coming, though. “There were some old trucks that, they didn’t want to take them out in the rain,” he said. ” [And] I don’t blame them.”