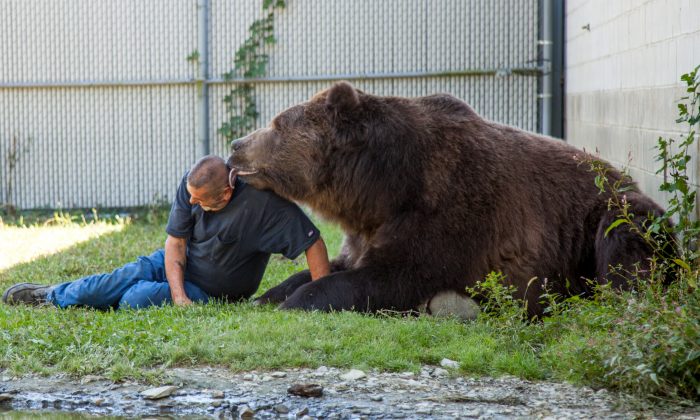 Jim Kowalczik with 22-year-old Kodiak bear Jimbo in one of the bear’s enclosures at the Orphaned Wildlife Center in Otisville on Sept. 7, 2016. (James Smith)
Orange County NY

OTISVILLE—Sticking a hand into a bear’s mouth is not a recipe for staying alive—unless you’re Jim Kowalczik and you’re playing with one of the teddy-like bears he and his wife Susan helped raise at their wildlife sanctuary in Otisville. The couple, who have been licensed wildlife rehabilitators for two decades, became an official non-profit last year, calling their 109 acres of land that houses everything from deer to chipmunks to ducks and bears, the Orphaned Wildlife Center.

Their goal is to rehabilitate all the wildlife that comes through their door, but if an animal is not able to survive in the wild, like the couple’s 11 bears, they have a forever home at the Center.

Jim and Susan are the main caretakers of the sanctuary and run it with just the help of volunteers and donations. When they need something like an incubator, materials for a new enclosure, or food for all the animals, they put out a call on social media.

Videos of Jim playing with Jimbo, a 1,500-pound Kodiak bear, got the attention of national and international media earlier this year, which shot their Facebook followers up to over 97,000.

“Viral videos don’t exactly translate to money, but they translate to followers, which translate to helping us,” said Kerry Clair, the Center’s unpaid social media and website manager who helps with fundraising. “When we put out a call for help, we have more followers that can respond.”

They just built a new enclosure for the smaller animals they become inundated within the spring and early summer, and an outdoor area for the bears in the colder months. They’re now fundraising for another enclosure with a bigger pond so the bears don’t have to take turns being outside.