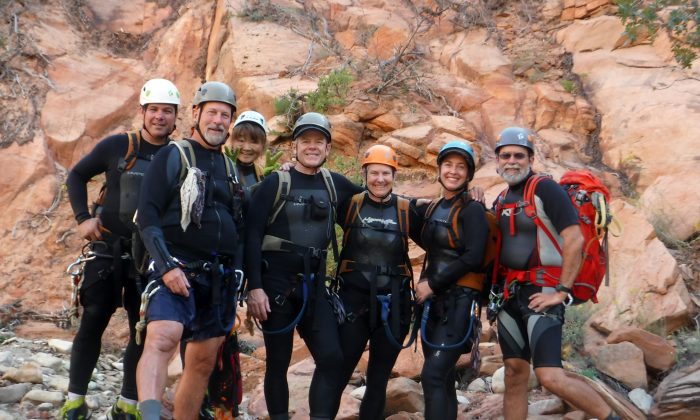 SALT LAKE CITY—Seven hikers in safety helmets, wetsuits and climbing harnesses smiled for a group photo before heading into the mouth of a narrow desert canyon in southern Utah’s Zion National Park.

The men and women from California and Nevada posed with their arms around each other before trying to climb and swim through the popular sandstone gorge. Days later, rescuers searching for their bodies found the camera, revealing the final image of the group before they died.

Within hours of entering Keyhole Canyon, dark skies unleashed fierce rains that sent water surging through the chasm, sweeping the group to their deaths Monday.

Linda Arthur, 57, and Steve Arthur, 58, both of Camarillo, California, were outdoor enthusiasts with three children and seven grandchildren, the couple’s family said.

“You just couldn’t imagine people who were better neighbors, and they were wonderful to everybody,” neighbor, Ronald Ormsby, 84, told the newspaper.

Gary Favela, 51, of Rancho Cucamonga, California, was adventurous and outgoing with a love for canyoneering, while Muku Reynolds, 59, of Chino, California, was a grandmother and passionate hiker, their families said in statements released Friday by park officials.

Robin Brum, 53, of Camarillo, California, was a mother, wife and selfless person who cared for those around her, her family said.

“She leaves a hole in our hearts and our lives that will never be filled,” the family said.

Don Teichner, 55, of Mesquite, Nevada, and Mark MacKenzie, 56, of Valencia, California, were also part of the group, but their families declined to release statements through the park, Zion spokesman David Eaker said.

The bodies of the seven were found throughout the week, the last coming Thursday. It’s the same day authorities recovered the body of a 33-year-old man killed by flash flooding near the Utah-Arizona border, raising the death toll to 20 from the violent rainstorm that hit Monday.

At least 12 other people, including nine children, died in a nearby polygamous town when two cars were swept away. A 6-year-old boy is still missing.

In Zion, the group was told of the danger of flash flooding when they got their entry permit Monday morning, park officials say. They decided to go anyway.

Though some of them were new to canyoneering, park policy prevents rangers from assessing their skill level or stopping them from entering canyons.

The park is investigating what led to the deaths and reviewing its policies, but the process for canyon entry permits is decided at the national level and any changes would likely need to come from the top down, Eaker said.

Rangers closed the park’s canyons after the storm hit, but there was no way to warn those already inside the majestic slot formations, which can quickly fill with rain water and leave people with no escape.

Aside from one spot near the canyon’s entrance, “there really is no high ground. You’re in a slot pretty much the whole way,” Eaker said.