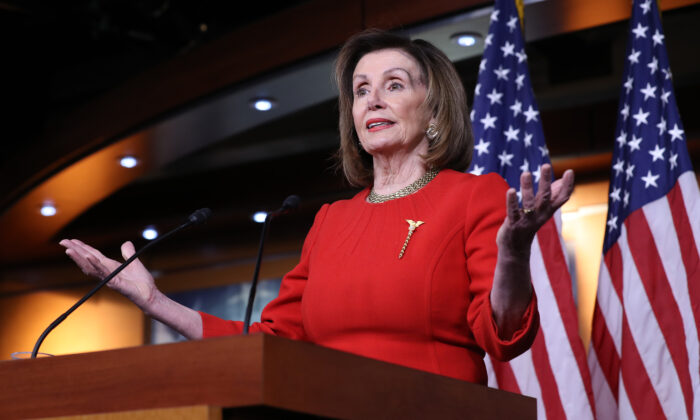 Speaker of the House Nancy Pelosi (D-Calif.) at the U.S. Capitol in Washington on Dec. 19, 2019. (Chip Somodevilla/Getty Images)

After a two-week holiday, the American public seems to have forgotten that its president is supposedly fighting to hang onto his job until Election Day and avoid being the first person ever legally evicted from the U.S. presidency in mid-term. This indicates what a total failure this phony impeachment has been.

House Speaker Nancy Pelosi (D-Calif.) doesn’t want to send the articles of impeachment to the Senate, ostensibly because she requires the Senate to call witnesses the House declined to try to subpoena. She knows that if the Senate calls witnesses, the well-prompted whistleblower by hearsay, guided by the office of House Intelligence Committee Chairman Adam Schiff (D-Calif.), will appear and lay bare the fraudulent beginnings of the whole odious process, (or go down for 10 years for perjury). That disaster would be bigger than would just letting the Senate vote it down overwhelmingly.

Since Senate Majority Leader Mitch McConnell (R-Ky.) won’t accommodate Pelosi’s absurd demands, this will come to one of two outcomes. Either Pelosi will abandon the demand for Senate witnesses and the Democrats will have the fallback position that it was a rigged and vitiated trial by partisan Republicans to save their president (whom most of them secretly would like to remove, according to the Democrats and their media house organs); or McConnell will tire of waiting and pass a resolution deferring any action until after the election, at which time the House will have to start all over again.

McConnell must be close to being able to pass such a vote now, and there is no evidence that any significant backlash would result. Under either scenario, the Democrats get, as they deserve, an embarrassing fiasco that should discourage frivolous future impeachment efforts.

Within a few weeks, the Democrats will face a perfect storm: an impeachment debacle, a manifestly inept and unfeasible group of candidates, which will likely present the alternative of reaching for an aged New York billionaire, with a larger fortune and ego than the incumbent, but with practically no natural constituency to put up against the Trump army, which is itching for vengeance on those who have tormented their leader; or locking arms behind an innocuous also-ran such as Sen. Amy Klobuchar (D-Minn.).

At least she would spare the Democrats the horrible defeat that awaits former Vice President Joe Biden, Sen. Bernie Sanders (I-Vt.), Sen. Elizabeth Warren (D-Mass.), or South Bend, Indiana, Mayor Pete Buttigieg. No serious American could vote for any of them for president. A majority would probably affirm, if polled, that they are, respectively, an ancient weather-vane with a hot air balloon for a brain, a raving Menshevik, a pseudo-American Indian who wants to spend $52 trillion on compulsory universal health care, and a glib, undistinguished mayor of a small city masquerading as a combat veteran crusading for gay rights.

Klobuchar would maintain the party elders in their seats of power, from which they cheated Hillary Clinton in 2008 and Sanders in 2016, and they may have to lock arms again to sand-bag Bloomberg, though his campaign to date has not caused a ripple anywhere, despite his deep open pockets.

All the while, ticking like the fuse in the Little Boy in the bomb bay of the B-29 Enola Gay over Hiroshima in August 1945 are the conclusions of the special counsel, which, if the report of the inspector general of the Justice Department is any guide, are going to incinerate the respectability of many veterans of the Obama justice and intelligence apparatus and the Hillary Clinton campaign. Its effects will not be diluted in the slightest by the sleazy current attempt to portray the attorney general (William Barr) and the special counsel (John Durham) as partisan agents for the administration.

As the Democratic myth-makers regroup after the impeachment fizzle, contemplating how to rescue the House speaker out in the middle of the minefield she sowed, the new line is that the president is lashing out at Iran with no policy or justification and because he is so distracted by the impeachment threat. It is one of the many psychiatric mysteries of the Trump-hatred syndrome that its expositors—despite developing the shakes, glottal stops, and an almost complete arrest of the capacity for rational thought when his name is mentioned—claim a perfect talent at mind-reading the president.

It is like the Dudley Moore film in which, when the aged housekeeper flatulates, Moore screams at the (unoffending) dog. It is all a displacement: In the skilled analysis of his enemies, Trump ordered the killing of the world’s leading terrorist who had severely provoked the United States, because he was worried about the absurd impeachment articles that allege no illegalities.

In fact, all indications are that the president is enjoying the spectacle of his enemies wallowing in their quavering self-righteousness. They can’t win the issue with McConnell, and they have passed the off-ramp for any symbolic half-measure such as an unctuous vote of censure; no one can take righteousness from this Democratic claque of liars seriously.

Their most hilarious pretense to outrage this week is that Trump should have consulted the Democratic congressional leadership, a sieve to the media now preoccupied with the spurious attempt to remove him from office, before killing Soleimani.

The way the impeachment farce is rolling out is just one victory after another for the president. Al Green, the egregious pony-tailed Democratic congressman from Texas, who moved the first impeachment motion, which had significant Democratic support, told the country last week that he came to this idea when Trump announced he was a candidate.

The constitutional criteria for removal from office of a U.S. president have been reduced in Rep. Green’s mind to the high crime and misdemeanor of having the effrontery to declare oneself to have the ambition to seek the office: preemptive impeachment and removal from an office long before the offender is even nominated by any organization as a candidate for the office. He and his Democratic House supporters make the Red Queen look like a hemophiliac bleeding heart procedural reformer and civil rights activist.

Not to be left out of this comical merry-go-round is Maxine “Impeach 45!” Waters, a Democratic congresswoman from Los Angeles, who was completely taken in last week by pranksters claiming to be Russians with information about Trump’s collusion with Russia.

Trump couldn’t write such an entertaining script himself; no one could. Impeachment may be distracting him, but not in a way that causes him to respond decisively to the systematic murder of Americans by Islamist terrorists. More likely, he is splitting his sides laughing as the Democratic members of the Congress wallow around in their “solemn, sad” duty (Pelosi), of such urgency that it had to be rushed through the House before Christmas, but must now await completely unconstitutional concessions demanded by the speaker from the Senate. Donald Trump pulled 25 million television viewers every week for 14 years; he knows riveting entertainment when he sees it.