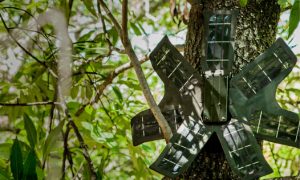 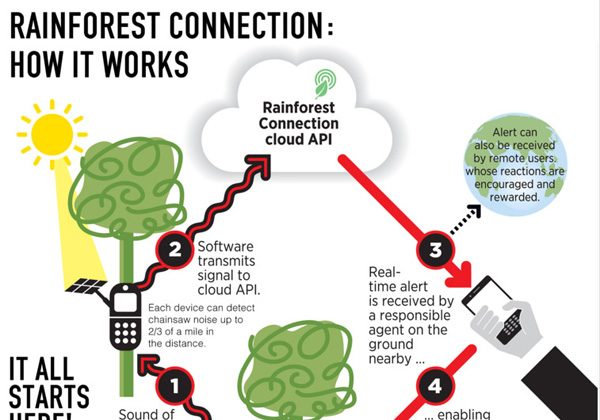 news.mongabay.com
View profile
Follow
biggersmaller
Print
After exceeding an ambitious fundraising target to launch a near-real time forest monitoring system in the Congo Basin, a San-Francisco based start-up is now eyeing expansion in the Amazon where it hopes to help an indigenous rainforest tribe fight illegal logging.

On Monday, Rainforest Connection (RFCx) announced a partnership with Equipe de Conservação da Amazônia, a Brazilian NGO, to bring its alert system to the forest homeland of the Tembé people. Rainforest Connection’s system is built using a network of recycled Android smartphones, which are modified to detect specific sounds, including the audio signatures to chainsaws, gunshots, and vehicles. When the system registers one of these sounds, it sends a signal — in real-time — to local authorities, who can then potentially take action to stop illegal logging or poaching as it happens. Each RFCx device can monitor roughly three square kilometers of forest.

RFCx has potential to help the Tembé fight illicit timber harvesting in their 600,000-hectare territory by “listening” for the movement of logging trucks, according to Vasco van Roosmalen, Equipe de Conservação da Amazônia’s director.

“The technology being developed by Rainforest Connection is an extremely powerful tool for the protection of rainforests, especially in our case – when combined with the on-the-ground presence and determination of local indigenous groups serving as guardians of their traditional lands which occupy over a quarter of the entire Amazon region,” he said in a statement.

Rainforest Connection says the project would install RFCx devices “at all key entrance and extraction points with GSM coverage for monitoring trucks and targeted areas for illegal logging (chainsaws).” It would also fund training for indigenous rangers.

“The Tembé Rangers are already being trained as first responders by ECAM. We would train them to use our system and expand it,” said the group. “With only 30 Rangers to cover 600,000 hectares, our system is a force multiplier for the Tembé.”

The Tembé project comes after Rainforest Connection raised more than $100,000 during a Kickstarter campaign that will establish a RFCx network in the rainforest of Cameroon. That campaign, which currently exceeds $120,000 in pledges, is now targeting $195,000 to support the initiative in Brazil.

The potential of the system has garnered Rainforest Connection considerable attention during the course of its campaign, including a celebrity endorsement from rocker Neil Young. Topher White, the project’s founder, estimates that each RFCx device offers the greenhouse gas emissions-equivalent to taking 3,000 cars off the road for a year.

“Each RFCx device ‘protects’ 300 hectares,” he said. “Emissions from logging are 50 tons of carbon dioxide per hectare, translating to 15,000 tons per device.”

White added that Rainforest Connection is also hoping to establish the system in Panama in partnership with the Guna people and the non-profit Earth Train.