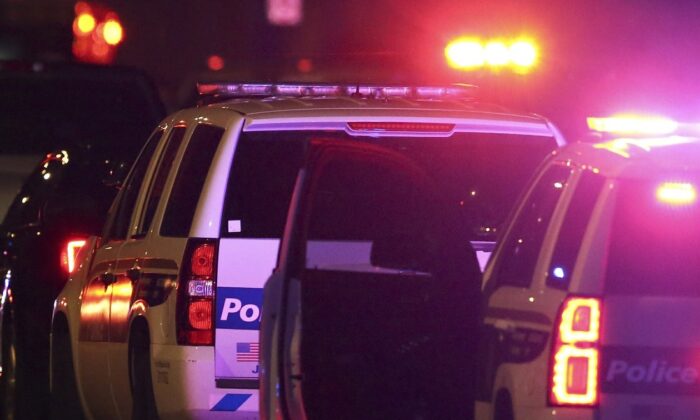 Police vehicles at the scene of a shooting in Phoenix on March 29, 2020. (Ross D. Franklin/AP Photo)
Arizona

Two men have died after allegedly attempting to force their way into a home in Phoenix, a move that resulted in one of the residents of the home firing deadly shots against the intruders.

The incident took place on June 25. Officers responded to 911 calls coming from 27th Street and McDowell Road at about 7:45 a.m. When the officers arrived at the home, they found two men on the ground in front of the house, who had both been shot.

“Witnesses told the officers the shooter was inside the home next to where the men were lying,” Sgt. Philip Krynsky said, according to Fox29.

The men were identified as 24-year-old Jose Gutierrez and 20-year-old Jairo Perez. The three occupants in the home provided the police with consistent stories, claiming that they had shot the men in self-defense when the duo tried to force their way into the home.

The suspects were released after the Phoenix police consulted with the Maricopa County Attorney’s Office. Charges will soon be submitted for review.

Phoenix has seen similar shooting incidents in the past.

In August 2021, four men attempted to break into a home, with one of them kicking on the front door. However, they were soon met with a barrage of bullets. Surveillance video later showed the car in which the criminals had arrived, speeding away. Two of the suspects were seen fleeing on foot.

In March 2019, a Phoenix homeowner shot a person who tried to break into his home. The intruder’s accomplice was also shot, suffering injuries.

In an interview with local media, the homeowner in that case insisted that he would never hesitate to defend himself again in case of a future break-in. “If they come in … [they] better come in ready,” he said.

According to Arizona’s state law A.R.S. 13-405, a person is justified in threatening or using deadly force if “a reasonable person would believe” that deadly physical force is necessary to protect himself against another’s “use or attempted use” of unlawful deadly physical force.

Whether the use of deadly force is justified or not in a specific case is up to a jury to determine on trial, according to Arizona law firm JacksonWhite Law.