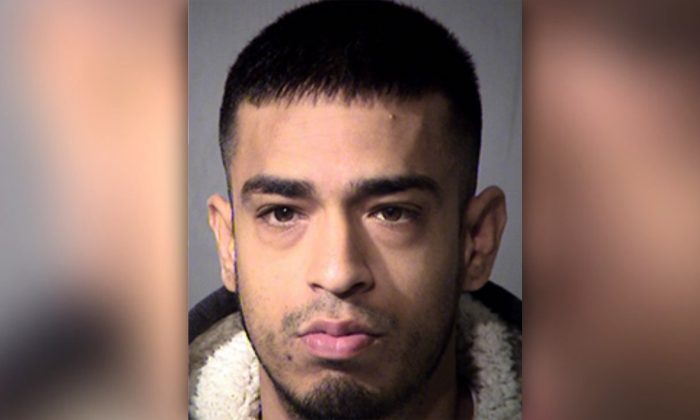 A Phoenix father has been sentenced to 27 years behind bars in the death of his infant daughter.

Prosecutors said the mother of 3-month-old Adrianna Gutierrez brought her to visit Ruiz’s home at his suggestion in February 2017. She was left overnight and was later found unresponsive.

The child was taken to a hospital where three days later she died from brain injuries.

Phoenix police were cited by AZ Family as saying that the infant had been badly beaten and thrown against a headboard.

Police said Ruiz initially lied about what happened, but later admitted that he was upset the baby would not stop crying. He allegedly threw a full bottle of formula at the baby’s face, shook her, then threw the child against a wooden headboard.

“Adrianna Gutierrez deserved more from the man who was her father,” Maricopa County Attorney Bill Montgomery said, according to YourValley. “Instead of the love, encouragement, and support she should have received over the course of her life, her life was senselessly ended.”

Guitierrez received a flat sentence, meaning he must serve the entire term.

“While 27 years cannot restore Adrianna’s life,” Montgomery said, “it is a clear demonstration that the defendant has a price to pay.”

“My heart breaks for this precious baby girl who didn’t have a chance to live,” one person commented.

“I feel that it is wrong that someone could take someone’s life intentionally by abuse and plead out to less than life,” another commenter wrote.

A GoFundMe page that was set up in 2017 in the baby’s name said, “this defenseless soul, at the mere age of almost four months, faced unfathomable actions against her.”

“An indispensable amount of gratitude is extended to the doctors, nurses, and first responders who did everything possible in their attempt to save this little angel’s life and for the comfort they provided her and the family from the moment Baby Adrianna walked into their lives to the time of her passing,” the note on the campaign page reads. “The family is also immensely appreciative to the investigators of baby Adrianna’s death as they continue their pursuit of justice for this beautiful angel.”

The total number of emergency department visits for unintentional injuries in the United States in 2017 was 29.2 million, according to the CDC.