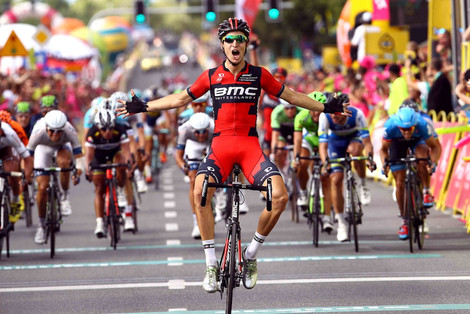 Taylor Phinney roars with satisfaction as he hands on to win Stage Four of the 2013 Tour de Pologne. (bmc-racing.com)
Cycling

BMC’s Taylor Phinney probably started Stage Four of the Tour de Pologne planning on repeating his Stage Three performance—leading out team mate Thor Hushovd in the final sprint so Hushovd could get a second win.

Sometime during the long (232 km) hilly stage, Phinney’s plan changed. After the last of the eight breakaway riders was caught, as the peloton prepared for the bunch sprint, the 23-year-old American took a flyer. He attacked with eight km to go, hoping to hold off the combined pedaling power of the all those teams which desperately wanted a sprint finish. And he succeeded.

Phinney is an accomplished time trialer and he showed it clearly in the closing kilometers of Stage Four; he only opened a gap of 16 seconds over the peloton, but he maintained a gap all the way to the line, finishing ten meters ahead of his pursuers.

“I just put my head down and decided I wasn’t going to look back and slowly commit to it and give it everything I had,” he said on the BMC website.

“It was twisty and turning enough that I could maintain a lot of speed. I had a lot of power, but the last couple of kilometers were excruciatingly painful. I crossed my fingers that it wouldn’t be one of those finishes where the guy gets passed 20 meters before the line.”

Phinney hadn’t won a stage all season; his last victory came in the time trial of the USA Pro Cycling Challenge in August 2012. When he finally got that next win, it came just the way he wanted it.

“This is how I always dreamed of winning—foiling the sprinter’s plans at the end of the race,” he said. “It was sort of a Fabian Cancellara-style, Milan-San Remo victory scenario. It’s really amazing to have it happen and it was a great feeling to finally put my hands up.”

And his team mate Thor Hushovd? He still managed to finish sixth, and sixth in the points. Phinney took the point lead from Hushovd with the stage win. Hushovd is still one spot ahead in General Classification at 115th—whatever consolation that might be.

Despite the back-to-back wins, BMC is only seventh in the team classification.

All that will change on Thursday, when Stage Five offers the riders three Cat One and three Cat Two climbs.