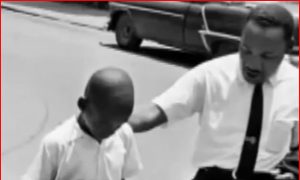 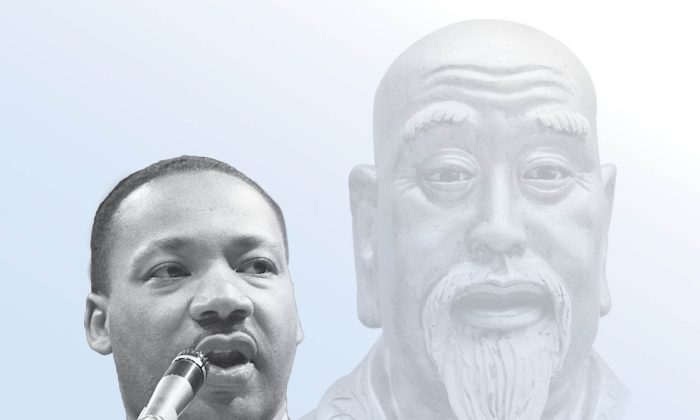 Since 1971, the third Monday of each January has been a U.S. federal holiday dedicated to Martin Luther King Jr.., the great American civil rights leader. Today, he is remembered not just for his contribution to the civil rights movement half a century ago, but for the universal values reflected in his accomplishments and sacrifice.

“I refuse to accept the view that mankind is so tragically bound to the starless midnight of racism and war that the bright daybreak of peace and brotherhood can never become a reality,” King said in his Nobel Prize acceptance speech. “I believe that unarmed truth and unconditional love will have the final word.”

For him, the path toward goodness and progress was a matter of conscious enlightenment.

Hundreds of years before Christ, in war-torn ancient China, the philosopher Mo Zi saw the same principles at work:

“Suppose we try to locate the cause of disorder, we shall find it lies in the want of mutual love,” Mo Zi said in his book of the same name “Mo Zi.”

Suppose we try to locate the cause of disorder, we shall find it lies in the want of mutual love.
— Mo Zi

Though little known in our time, his pacifist and humanitarian teachings earned this artisan-scholar high regard from his contemporaries.

Like Martin Luther King, Mo Zi practiced what he preached. A carpenter and engineer by trade, Mo Zi lived in the fifth and fourth centuries B.C., a time in Chinese history known as the Warring States Period. As the name suggests, China was divided into many mutually sparring powers vying for control of “all under Heaven.”

Mo Zi and his followers would often travel between states and hold talks with various rulers, in the hope that they would give up their plans of conquest and rule their lands in peace. Mo Zi hated war, but believed in maintaining strong defenses to ward off military aggression. His technical training, which allowed him to construct fortifications, aided him in this pursuit.

The decision to give up war may seem like a moral one, but for the people he dealt with, Mo Zi could turn it into a practical matter.

Once, the lord of the powerful state of Chu wanted to attack the state of Song. He had hired the expert engineer Lu Ban to build for him advanced siege weapons to breach the sturdy walls of the Song defenses. Mo Zi heard of these plans and walked 10 days and 10 nights to converse with the king of Chu and Lu Ban, who would be in charge of the military operation.

At the Chu royal court, Mo Zi tried to reason with the lord against attacking Song. The lord of Chu allowed Mo Zi to demonstrate his ways before Lu Ban. Mo Zi produced some wooden pieces, took off his belt, and laid them on the ground. The belt stood for the wall of Song State, and the pieces were the two armies’ military units.

Representing Chu’s forces, Lu Ban took some of the pieces and tried his hand against Mo Zi, who played the part of Song’s defense. They played nine rounds, but no matter which plan of attack Lu Ban tried, he found himself beaten by Mo Zi’s defenses.

“Then there is only one way for me to defeat you,” Lu Ban declared in embarrassment.

Mo Zi replied: “I know how you intend to have me killed in order to stop me from leading Song’s defense. You are thinking that the invasion will succeed if I am gone. I should warn you, however, that three hundred of my disciples are already at the gates of Song. They are armed with my tools and know my methods. Even if you kill me here, Song’s defense is sure to be strong enough to withstand anything you bandits throw at it.”

The lord considered this and decided not to attack Song.

The Philosophy of Mo Zi

According to Mo Zi, impartial, universal love was the only way to ensure a peaceful and harmonious society. As recorded in the “Mo Zi,” a text detailing the principles of his teachings, Mo Zi clarifies his view:

“If everyone in the world will love universally; states not attacking one another; houses not disturbing one another; thieves and robbers becoming extinct; emperor and ministers, fathers and sons, all being affectionate and filial—if all this comes to pass, the world will be orderly. Therefore, how can the wise man who has charge of governing the empire fail to restrain hate and encourage love?”

Mo Zi was frequently at odds with Confucian teachings, which, despite advocating universal brotherhood and cooperation, did not propose the egalitarianism that Mo Zi dreamed of. According to Confucius, one’s individual responsibilities toward family, friends, and superiors was the more natural path to long-term harmony.

Nor did Mo Zi agree with the Confucian emphasis on ritual and music. While Confucius intended these aspects of social life to provide order and bring stability, the engineer Mo Zi saw them as a waste of resources best allocated to increasing welfare.

Eventually, the Warring States Period came to an end when China was conquered by the powerful Qin State. Its king, who became the first emperor, followed neither Confucianism nor Mohism, and used violence to crush both schools of thought. Scholars were punished and their books were burned.

The Qin Dynasty lasted only 15 years, and was soon replaced by the great Han Dynasty. Chinese scholars recovered and spread the texts of the sage Confucius, whose teachings and morality have become a fundamental part of Chinese culture and civilization ever since. Mo Zi’s vision of absolute egalitarianism, meanwhile, was largely forgotten.