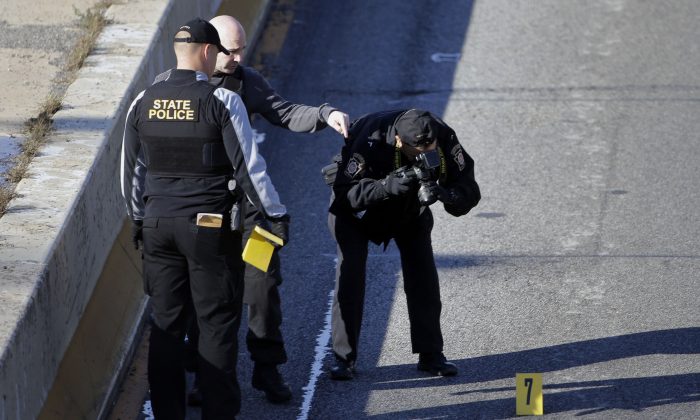 Investigators work the scene of a fire and shooting Tuesday, Nov. 24, 2015, in Philadelphia. A Pennsylvania state police trooper was shot in the shoulder after a fiery crash on a Philadelphia highway. Officials said three suspects are in custody and the trooper has been hospitalized in stable condition. (AP Photo/Matt Rourke)
US

PHILADELPHIA  — A traffic stop on a downtown Philadelphia highway turned violent Tuesday when a suspect got back into his car and fled, rear-ended a school bus and then shot and wounded a trooper, state police said.

Three suspects were taken into custody and the trooper has been hospitalized in stable condition, Philadelphia Police Department spokeswoman Leeloni Palmiero said. He was shot in the shoulder.

District Attorney Seth Williams said the confrontation apparently started with a vehicle stop, and that the trooper appeared to have been hit while still in his cruiser. He said the trooper returned fire after being shot and some good Samaritans were involved in the capture of the suspects.

The ordeal began at about 9:30 a.m., along Interstate 676, which runs through the center of Philadelphia, said state police spokeswoman Maria Finn. Two troopers pulled over a vehicle, after which a suspect got back into his car and fled, she said.

The suspect’s car rear-ended a school bus, causing both to catch fire. There were no children on the bus, officials said.

“He got out of the vehicle and started firing at the trooper,” Finn said of the suspect. A police cruiser near the scene appeared to have bullet holes in the windshield.

The suspect was injured and two passengers in the suspect’s vehicle were taken into custody. Finn didn’t know the extent of the suspect’s injuries.

Steve Glowacki was working nearby when he saw the shooting.

“I saw a gunfight down here,” he said while pointing to the interstate from an overpass. “I came out, there were cops down there, shooting at someone, and then someone was shooting at them.”

He said he saw state police troopers with guns drawn.

“I heard what I thought was gunfire, and it turns out that it was,” he said. “When I came out, there was a gunfight going on and that car had already hit the bus.”

Mayor Michael Nutter spoke to the trooper at Hahnemann University Hospital, and said he was “awake, alert and talking” and in “good spirits.”

The trooper won’t be publicly identified until his family members are notified, authorities said.

The busy stretch of road was closed in both directions between Interstate 76 and Interstate 95, but a portion of it reopened later Tuesday morning.