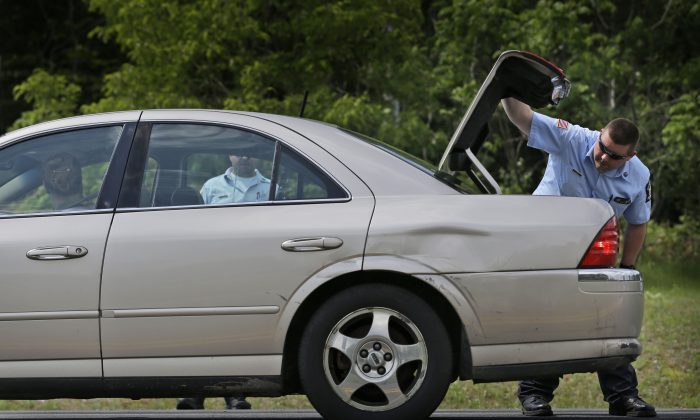 Law enforcement officials check the trunk of a car at a check point near the border of Dannemora, N.Y., Wednesday, June 10, 2015. Police were resuming house-to-house searches near the maximum-security prison in northern New York where David Sweat and Richard Matt , two killers escaped using power tools. (AP Photo/Seth Wenig)
US

PHILADELPHIA— Did the escaped New York killers make it to the City of Brotherly Love?

A Philadelphia cab driver says he picked up two men matching the descriptions of missing inmates Richard Matt and David Sweat around 4:15 a.m. Thursday and dropped them off at the city’s Amtrak station.

The 48-year-old Matt and 34-year-old Sweat were discovered missing Saturday.

Authorities say they used power tools to cut through a steel wall and break through bricks at the 3,000-inmate Clinton Correctional Facility in far northern New York.

They say the men crawled through a steam pipe to a manhole outside the prison, about 20 miles from the Canadian border.

Matt and Sweat were serving life sentences for murder.