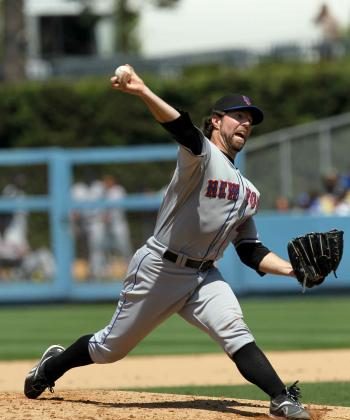 Dan Pomerleau
View profile
Follow
biggersmaller
Print
The New York Mets (55–56) ended their three-game road series against the Philadelphia Phillies (62–49) with a 6–5 loss on Sunday despite taking a two-run lead in the first inning.

A 10-strikeout performance over seven innings by Phillies ace Roy Halladay proved too much for Mets batters.

The Mets lost to the Phillies 7–5 in the series opener on Friday but pulled off a 1–0 win on Saturday with a solo homer in the seventh inning from right fielder Jeff Francoeur.

The Mets got off to an explosive start on Sunday, with Jose Reyes leading the charge with a line drive double in the first inning.

Then, Angel Pagan singled to center field to send Reyes charging home with some excellent base running. It was the first Mets run of the year against Halladay, who pitched a perfect game earlier this season.

Pagan went on to steal second and third, and came home off an Ike Davis line drive single that knocked Halladay’s glove clear off his hand.

Mets starting pitcher R.A. Dickey had a clean first inning with three straight groundouts, but things turned sour for the veteran knuckleballer after that.

The Phillies scored five runs off seven hits including a three-run homer from Raul Ibanez with only one out.

Dickey was allowed to close the inning after a visit to the mound with two outs, but was eventually pulled for Raul Valdes after just 60 pitches.

After two scoreless innings, Reyes and Pagan repeated their first inning performance in the sixth inning.

Reyes nailed his second double of the night in first at bat, and Pagan followed with a line drive single to right field to send Reyes home.

Pagan took second on an error from right fielder Domonic Brown who fumbled the ball but remained stranded there.

Then in the seventh inning, Fernando Martinez hit a lead-off single. That was followed by a double by Josh Thole.

Martinez scored with Ruben Tejada grounding out, and then Chris Carter hit a double to center field to send Thole home and bring the score to 6–5 Phillies.

Halladay then closed the door by striking out Carlos Beltran with runners on first and second to end the inning.

The Mets will have an opportunity for revenge against the Phillies at home in a three-game series that starts Friday.

Before that they host the Colorado Rockies Tuesday through Thursday in what will be the first meeting between the two clubs this season.