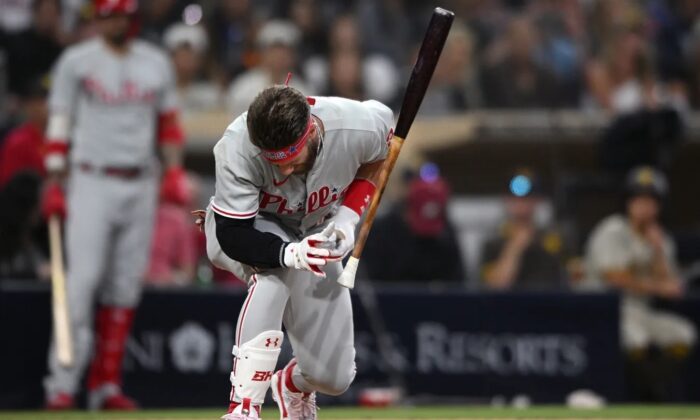 Philadelphia Phillies designated hitter Bryce Harper (3) reacts after being hit by a pitch during the fourth inning against the San Diego Padres at Petco Park in San Diego on June 25, 2022. (Orlando Ramirez/USA TODAY Sports via Field Level Media)
Baseball

Philadelphia lost Bryce Harper “for an indefinite period of time” Saturday night with a fractured left thumb when he was hit by a 97-mph Blake Snell fastball during the Phillies’ 4–2 victory over the Padres in San Diego.

Harper fell to the ground in pain after getting hit in the fourth inning. He yelled at Snell as he was leaving the field, although the Padres pitcher was visibly apologetic. Minutes later, the Phillies announced Harper had suffered a fracture to the thumb.

Harper is one of the game’s top hitters and the reigning Most Valuable Player in the National League.

“I’m just really bummed for the organization, the guys and, you know, the city of Philadelphia fans as well,” Harper said. “I love running out there playing every day.”

He’s hitting .318 this season with 21 doubles, a triple, 15 homers, and 48 RBIs in 64 games. He has a .385 on-base percentage and .599 slugging percentage for a .984 OPS despite being limited to being the Phillies designated hitter due to a small tear in his UCL. He also missed time last week with an infected blister.

Meanwhile, J.T. Realmuto triggered a three-run fifth with a leadoff homer against Snell. Alex Bohm followed with a double, moved to third on a single by Didi Gregorius and scored on a groundout by Yairo Munoz. Kyle Schwarber then drove in Gregorious with a single.

The Padres scored twice in the bottom of the fifth against Phillies starter Zach Eflin on a leadoff single by C.J. Abrams, a two-out walk drawn by Jake Cronenworth and a two-run double by Jorge Alfaro just over the glove of center fielder Matt Vierling.

Philadelphia added a run in the sixth when Realmuto drew a walk with one out, stole second and scored on Bohm’s second double.

Eflin (3–5) gave up two runs on four hits and two walks, with three strikeouts in five innings to get the win. Relievers Andrew Bellatti (struck out the side in the sixth), Corey Knebel, Brad Hand and Seranthony Dominguez (his second save) all followed with a perfect inning as Phillies pitchers retired 13 straight Padres to end the game.

Snell (0–5) gave up four runs on six hits and two walks, with four strikeouts in 5 2/3 innings to take the loss.