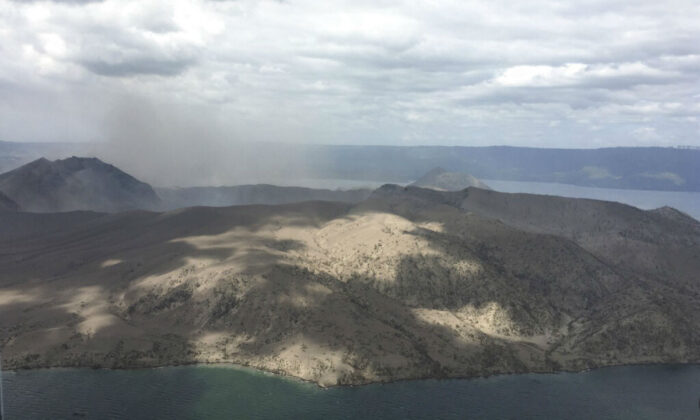 Researchers in the Philippines said the Taal volcano is showing magmatic activity that may indicate another eruption is imminent, with emissions of dirty-white plumes and volcanic earthquakes recorded weeks after its initial eruption.

The Philippine Institute of Volcanology and Seismology (PHIVOLCS) said on Feb. 3 that it had recorded at least 134 volcanic earthquakes in the past 24 hours.

The earthquakes “signify magmatic activity beneath the Taal edifice that could lead to eruptive activity at the Main Crater.”

The warning came just over a week after Philippine authorities lowered the alert level at the popular tourist destination south of Manila—a move that would allow many of the more than 376,000 displaced villagers to return home.

Taal erupted on Jan. 12, spewing ash, steam, and rocks. The eruption caused no known deaths but delivered an early crisis this year for one of the world’s most disaster-prone nations.

PHIVOLCS said its seismic monitoring network detected two seismic events at 4:20 a.m. and 5:42 a.m., which registered “respectively at magnitude 3.2 and 2.3, the first having been felt at Intensity IV in Laurel and Agoncillo and Intensity III in Lemery, Batangas.”

The government agency added that the volcano emitted “voluminous emission of dirty-white to white steam-laden plumes” rising 800 meters (2,625 feet) high, recording sulfur dioxide emissions at an average of 97 tonnes per day on Feb. 1.

PHIVOLCS said alert level 3 is currently maintained over Taal Volcano, and it recommends that entry be strictly prohibited into the Taal Volcano Island and areas over Taal Lake and communities west of the island within a 7-kilometer (4.3-mile) radius from the main crater.

The public was urged to remain vigilant due to ground displacement across fissures, frequent ash fall, and minor earthquakes.

“Civil aviation authorities must advise pilots to avoid flying close to the volcano as airborne ash and ballistic fragments from sudden explosions and wind-remobilized ash may pose hazards to aircraft,” it said.

The agency on Jan. 26 lowered the alert level from 4 to 3, which means there’s a “decreased tendency toward a hazardous eruption.” The highest level-5 alert indicates a major and much more dangerous eruption.

It also reduced to half the danger zone where residents have to be evacuated, from the 14-kilometer (8.7-mile) radius around the volcano. Taal had last erupted 43 years ago.

“We have to be careful of Taal because of the danger it may still bring, so at the lower level, there should be heightened preparedness. People should brace for rapid evacuation,” Renato Solidum, the head of the institute, said in a televised news conference at the time.

The 311-meter (1,020-foot) Taal is the second-most restive of about two dozen active Philippine volcanoes and lies precariously near densely populated areas. On its small island, more than 5,000 villagers, many of them working as tourist guides, fled as the ground shook and the volcano belched a tall plume of dark-gray ash and steam into the sky. Hundreds of horses, cows, and other animals were left behind.

The Philippine archipelago lies in the so-called Pacific “Ring of Fire,” a seismically fragile region around the ocean basin, where most of the world’s earthquakes and volcanic eruptions occur.