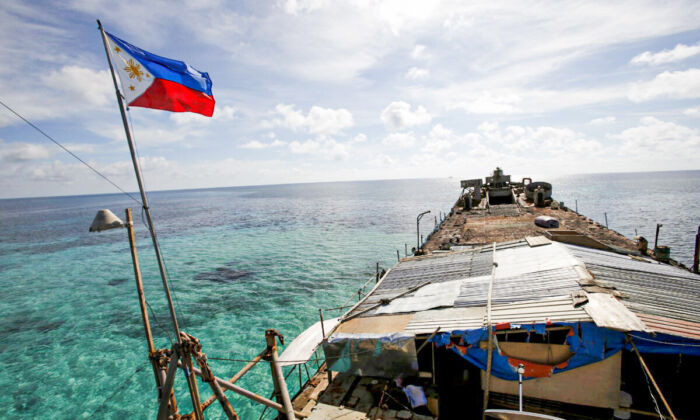 A Philippine flag flutters from BRP Sierra Madre, a dilapidated Philippine Navy ship that has been aground since 1999 and became a Philippine military detachment on the disputed Second Thomas Shoal, part of the Spratly Islands, in the South China Sea, on March 29, 2014. (Erik De Castro/Reuters)
International Relations

The Philippines said Monday that it summoned China’s ambassador over the “illegal intrusion” and “lingering presence” of a Chinese navy ship in the country’s waters, and to demand China respect its territory.

The Department of Foreign Affairs (DFA) said in a statement that a Chinese reconnaissance ship entered Philippine waters without permission from Jan. 29 to Feb. 1. The vessel was detected reaching the Cuyo Group of Islands in Palawan and Apo island in Mindoro.

The Philippine navy vessel BRP Antonio Luna had challenged the Chinese vessel, which alleged that it was exercising “innocent passage,” and repeatedly ordered it to leave the country’s waters immediately, it stated.

DFA said the Chinese vessel continued its activities in Philippine waters and “lingered” in the Sulu Sea for three days, despite the fact that its action did not constitute innocent passage and violated Philippine sovereignty.

“Acting undersecretary Lazaro demanded that China respect Philippine territory and maritime jurisdiction and to comply with its obligations under international law, particularly UNCLOS, and direct its vessel to desist from entering Philippine waters uninvited and without permission,” it added.

The Chinese embassy did not immediately react to the Philippine government’s statement.

The Philippines government has lodged diplomatic protests against China numerous times over its actions in parts of the South China Sea that China claims, but these appear to have had little to no effect.

In November last year, the Philippines reported that three Chinese coastguard vessels had blocked and fired water cannons on two of its supply boats transporting food to the marines stationed on the Sierra Madre on Nov. 16, 2021.

Philippine Foreign Secretary Teodoro Locsin lodged a strong protest regarding the incident and demanded China to “back off” from the country’s territorial zone.

However, the verdict has had little impact on China’s behavior, with Beijing refusing to abide by it. The resulting territorial disputes are ongoing, with Beijing continuing to pursue its claims to vast swathes of the sea, based on its so-called “nine-dash line,” which includes the reef.

Other nations, including Brunei, Malaysia, Taiwan, and Vietnam, also have competing claims to China.