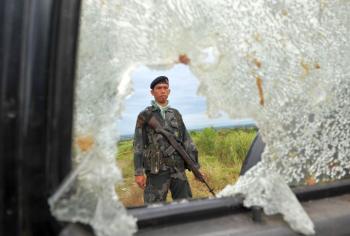 A military trooper is framed by a hole of a car window, one of the vehicles found at the crime scene where human remains were unearthed from a shallow grave as investigators try to find more bodies, victims of a massacre after gunmen shot at least 57 peop (Ted Aljibe/AFP/Getty Images)
World

After Philippines Massacre, Concerns About Impunity

By Charlotte Cuthbertson
Print
While the death toll rises in the Philippines after the Nov. 23 massacre, international media organizations are pushing for justice, amidst concerns of impunity.

More than 57 civilians, including 26 journalists and media workers were murdered in Maguindanao Province (on the southern island of Mindanao), journalists who went to the massacre site told Reporters Without Borders (RSF).

“This bloodbath is beyond human understanding,” a journalist from the nearby city of Koronadal told RSF, adding, “I have lost 12 of my colleagues in this massacre.”

According to witnesses and army officers, the province’s governor, Andal Ampatuan Sr., gave the go-ahead for his leading rival’s supporters to be ambushed while traveling in convoy, RSF said in a statement. The massacre was an attempt to prevent Esmael Mangundadatu, a political rival of the Ampatuan clan, from running for governor in next year’s local elections, according to RSF. Mangundadatu’s wife, who was one of the victims, was leading a convoy that planned to register him at an electoral office.

The attackers reportedly raped, tortured, and beheaded some of the victims. Most of the bodies have been found in mass graves, according to information obtained by RSF.

“The toll from this massacre keeps rising but the governor’s son, the leading suspect, still has not been questioned by the police,” RSF said. “President Gloria Arroyo says those responsible will be arrested and tried but all the information coming from the field so far indicates the contrary.”

Neither Andal Ampatuan Sr., nor his son have been arrested and are believed to be at the family home in the provincial capital.

The Philippines has a long history of impunity and slayings of journalists, according to Erik Jensen, senior research scholar at the Center on Democracy, Development and the Rule of Law, at Stanford University.

“This is the most daring attack on journalists in Philippine history, and maybe the sheer numbers and brutality will assure action where we’ve seen inaction in the past,” he said. “In an event like this, it could be a game-changer, in a constructive way born out of tragedy.”

Jensen said there was still a danger that convictions could result in impunity. “Part of that is related to the peculiar evidentiary standards in the Philippine criminal justice system,” he said. “But it’s also related to these inside deals with politicians.”

Jensen lived in the Philippines for four years representing the Asia Foundation as a senior advisor for governance and law.

In the past eight years, at least 74 journalists have been killed in the Philippines, and only four convictions have been secured—making the country the most dangerous place in the world for media workers, said the International Federation of Journalists (IFJ).

“Having a slaughter like this … I really hope the government, as well as politicians in Mindanao, have a wake-up call,” Jensen said. “This is just beyond the pale of anything that we’ve seen in the past.”

The IFJ criticized the government of Gloria Arroya, saying it has not acted to end the culture of impunity.

“The Arroyo administration must make a clear and unequivocal commitment to an immediate, independent and effective inquiry into this atrocity,” said IFJ General Secretary Aidan White. “With elections due in six months time the authorities must act now to guarantee the safety of journalists throughout the country.”

A national day of mourning was announced by President Gloria Arroyo in a statement Wednesday. “This crime is too outrageous not to prick the conscience of this nation or any other nation for that matter,” she said. “This is not a simple election feud between opposing clans; this is a supreme act of inhumanity that is blight on our nation.”

Nonoy Espina of the National Union of Journalists of the Philippines (NUJP), who is in Mindanao, told RSF that the government is not doing enough to arrest those responsible.

“How can the president’s adviser be pleased about obtaining undertakings from the governor when his son, the leading suspect, is still free?” he said. “Settling for mere promises is unacceptable after this massacre.”

Jensen said he met many journalists while in the Philippines, and that it has a long and proud history in the country. “It’s a ‘hurly-burly’ press in the Philippines, but amidst the hurly-burly press there are some truly world-class journalists. And they have a long history of acting courageously in the face of tragedy—though they’ve never seen a tragedy quite like this.”

“I can’t help but think this will have something of a chilling effect—certainly on press coverage in Mindanao.”

Residents involved in media in Manila, the northern area of the Philippines, are shocked by the massacre.

Dolly Zulueta, editor-in-chief of Manila-based Flavours magazine said she did not know any of the slain journalists personally, but was angered to hear of the killings. “It’s outrageous, it’s surreal, like, how can it still be happening in these modern times?” she said. “It angers me … that politicians would treat media people this way. This is supposed to be neutral, supposed to be reporting about what’s happening, and I believe we should be left alone.”

Norma Chikiamco, a writer and children’s book writer in Manila, said killing journalists while they were doing their job was tragic. “It’s part of the election violence,” she said. “The election is so many months away and already this has happened so we are already worried something like this will happen again.”