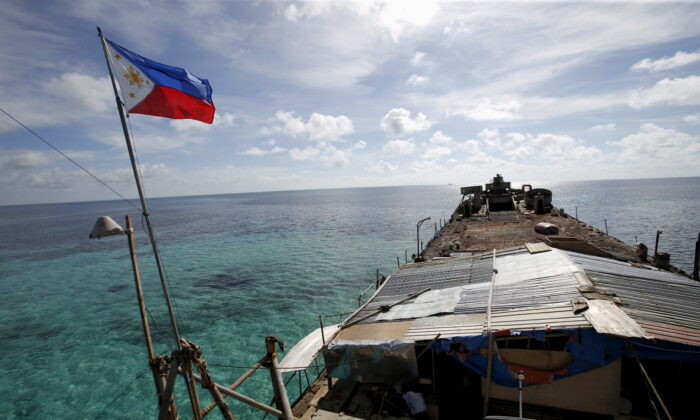 A Philippine flag flutters from BRP Sierra Madre, a dilapidated Philippine Navy ship that has been aground since 1999 and became a Philippine military detachment on the disputed Second Thomas Shoal, part of the Spratly Islands, in the South China Sea March 29, 2014. (Erik De Castro/Reuters)
Asia & Pacific

The Philippines has installed five 30-foot-long navigational buoys bearing the national flag on four islands near the disputed South China Sea, where Beijing has increased its military presence.

The Philippine Coast Guard (PCG) announced on May 18 the placement of five navigational buoys on four important islands—Lawak Island, Likas Island, Parola Island, and Pag-asa Island—in the South China Sea, which Filipino refers to as the West Philippine Sea.

PCG Commandant Admiral Artemio Abu said the markers indicate that the vicinity waters have been designated as special protected zones where mining and oil exploration are prohibited.

Abu praised the task force for the “resounding success in installing our sovereign markers that are now flashing lights at night to guide sailors as they traverse the treacherous waters of the [West Philippine Sea].”

“Several Vietnamese fishing boats, Chinese fishing vessels, and China coast guard vessels were not so far from their position, specifically at the vicinity waters off Subi Reef,” he said in a statement.

Abu claimed that Filipino coast guards were prepared to challenge the Chinese and Vietnamese vessels if they interfered with the mission to install the navigational buoys on the islands.

“My guidance to them was let us be the ones to challenge them. But according to the coast guard fleet, the West Philippine Sea was peaceful, and the vessels from Vietnam and China respected our mission,” he added.

According to the PCG, the navigational buoys were procured from Spain and are equipped with modern marine aids such as navigation lanterns and specialized monitoring systems that can transfer data to the headquarters in Manila via satellite.

The PCG announced on May 17 that it had established new command observation posts on Likas, Lawak, and Parola Islands to expand Manila’s “maritime domain awareness” in the West Philippines Sea.

“These [command observation posts] will optimize the strategic deployment of PCG assets by monitoring the movement of merchant ships in its surrounding waters and communicating maritime incidents to the PCG national headquarters,” Abu said.

Beijing claims much of the South China Sea as its own under its so-called “nine-dash line.” The Hague Tribunal ruled in favor of the Philippines in 2016, but it has had little to no impact on China’s behavior, with Beijing repeatedly intruding into Manilla’s territorial zones.

Earlier in March, the Philippines summoned China’s ambassador after a Chinese reconnaissance ship was spotted entering Philippine waters without permission from Jan. 29 to Feb. 1.

The Foreign Affairs Ministry claimed that the Chinese vessel continued its activities and “lingered” in the Sulu Seas for three days even after the Philippine navy had repeatedly ordered it to immediately leave.

In November last year, the Philippines reported that three Chinese coastguard vessels had blocked and fired water cannons on two of its supply boats transporting food to the marines stationed on the Sierra Madre, a grounded Philippine Navy ship on the Spratley Islands.

Other nations, including Brunei, Malaysia, Taiwan, and Vietnam, also have competing claims against China regarding the South China Sea.