Miracle on the Hudson Pilot to Retire
0 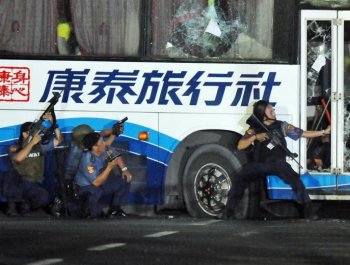 Philippine policemen take position as they start their attack on the tourist bus hijacked in Manila on August 23, 2010. (Ted Aljibe/AFP/Getty Images)
World

By Stephen Jones
Print
A fired policeman hijacked a tourist bus in Manila and killed at least seven passengers by the time the 10-hour siege ended on Monday night, local time.

Police later surrounded the vehicle, and a bloody gun battle ensued on the streets of the Philippine capital. The siege ended when Mendoza was shot dead.

The bus was originally carrying 25 to 30 passengers, depending on reports, mostly tourists from Hong Kong. Nine were released early on in the incident.

It was feared that there were none left alive after the Filipino driver escaped the bus shouting “all the hostages are dead!” reported Sky News.

At one point in the afternoon, a body was left dangling out of the window of the vehicle.

During the siege, Mendoza gave a live telephone interview with a local radio station, threatening to kill all the remaining passengers on board.

“I can see there are many SWAT teams arriving, they are all around,” he said.

“I know they will kill me, I'm telling them to leave because anytime I will do the same here.”

Police eventually shot the tires from the vehicle, which led to the gunman opening fire on the passengers.

At least seven were killed in the siege, AFP reported. A hospital also received the body of another woman believed to be among the hostages.

Police have declined to give exact figures for the number of casualties.

Hong Kong has issued its highest-level black notice for travel to the Philippines, an unprecedented move that indicates that a threat may be “imminent.”

“Hong Kong residents should avoid all travel to the country,” a government spokesman said in a statement. “Those who are already there should attend to their personal safety and exercise caution.”