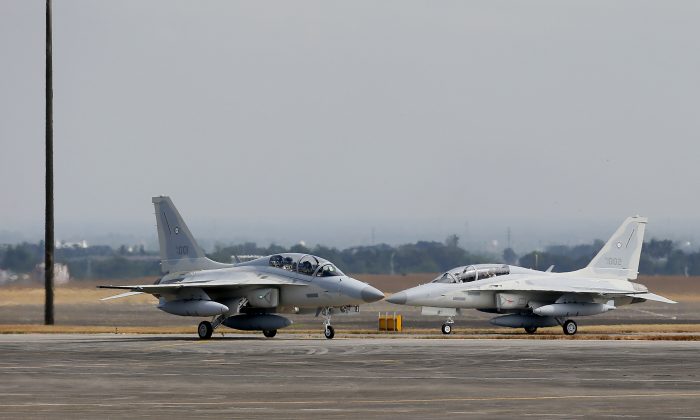 The FA-50 jets touched down at Clark Freeport, a former U.S. Air Force base north of Manila, as Philippine defense officials applauded and fire trucks sprayed water as a traditional welcome salute for the still-unarmed aircraft.

The Philippines bought 12 FA-50s, which are primarily trainer jets that the military converted to also serve as multi-role combat aircraft, from Korea Aerospace Industries at a cost of 18.9 billion pesos ($402 million). The other jets will be delivered in batches through 2017.

Weapons for the FA-50s, including bombs and rockets, will be purchased later.

The Philippine military decommissioned its last fleet of supersonic combat aircraft, the F-5, in 2005. A military modernization program that included plans for the purchase of at least a squadron of fighter jets and naval frigates didn’t happen for several years largely because of a lack of funds.

Over the years, the military has deteriorated to become one of Asia’s weakest.

Under current President Benigno Aquino III, however, territorial spats with China over islands in the South China Sea have escalated and resulted in the Chinese seizure of a disputed shoal in 2012, prompting the military to scramble to acquire new navy ships and air force planes with the help of the United States, the Philippines’ longtime defense treaty ally.

The new ships, aircraft and military equipment were expected to be purchased from this year up to 2018, according to Manalo.

Lt. Col. Rolando Condrad Pena III, one of three Filipino air force pilots who received training in Korea to fly the FA-50s, said that the jets could carry enough munitions payload and could be used in air-to-air and air-to-ground combat.

“Now that we have a supersonic aircraft our reaction time will be faster,” Pena told reporters.

Still, the Philippines has ruled out a military solution to the territorial conflicts with its limited defense capabilities. In January 2013, the Philippines brought its disputes with China to international arbitration, but Beijing refused to participate and pressed for one-on-one negotiations.

An international tribunal in The Hague, however, dismissed China’s legal arguments last month and ruled that it has authority to hear the Philippines’ case. It said it expects to hand down a decision next year on several issues raised by the Philippines, including the validity of China’s sweeping territorial claims under the 1982 United Nations Convention on the Law of the Sea.