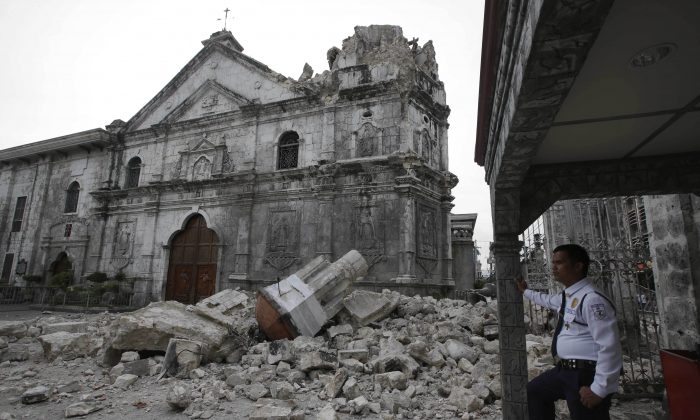 A guard stands near the damaged Basilica of the Holy Child following an earthquake that hit Cebu City in the central Philippines, Oct. 15. (AP Photo/Bullit Marquez)
Asia & Pacific

A magnitude-7.2 earthquake hit the Philippines on Oct. 15, followed quickly by a second, 5.4-earthquake and more than 50 other aftershocks. The death toll has increased to 97, as officials worked into the morning freeing people who are trapped in multiple buildings.

At least nine deaths came from Cebu Province, an urban and more densely populated island than the epicenter in nearby Bohol Island. Another death was reported in Siquijor.

Thirty-three people have been injured.

Many roads and bridges were reported damaged, making rescue operations difficult. But historic churches dating from the Spanish colonial period suffered the most. Among them was the country’s oldest, the 16th-century Basilica of the Holy Child in Cebu, which lost its bell tower.

The highest number of dead—18—were in the municipality of Loon, 26 miles west of Carmen, where an unknown number of patients were trapped inside the Congressman Castillo Memorial Hospital, which partially collapsed. Rescuers were working to reach them, said civil defense spokesman Maj. Reynaldo Balido.

As night fell, the entire province was in the dark after the quake cut power supplies. Windy weather and rain also forced back a military rescue helicopter.

Authorities were setting up tents for those displaced by the quake, while others who lost their homes moved in with their relatives, Bohol Gov. Edgardo Chatto said.

Extensive damage also hit densely populated Cebu City, across a narrow strait from Bohol, causing deaths when a building in the port and the roof of a market area collapsed.

Impact of Quake and Aftershocks
The quake set off two stampedes in nearby cities. When it struck, people gathered in a gym in Cebu rushed outside in a panic, crushing five people to death and injuring eight others, said Neil Sanchez, provincial disaster management officer.

“When the shaking stopped, I ran to the street and there I saw several injured people. Some were saying their church has collapsed,” she told The Associated Press by phone.

But the quake was centered inland and did not cause a tsunami.

The quake hit for about 30 seconds.

The 7.2 quake hit around 8:10 a.m. local time. Cebu City, the largest city near the quake at almost 800,000 residents, suffered “strong” shaking, according to the U.S. Geological Survey (USGS).

At least 10 aftershocks following the quake registered above magnitude-4.8.

The USGS later downgraded the first earthquake to a 7.1, but the Philippine Institute Of Volcanology And Seismology has it as 7.2