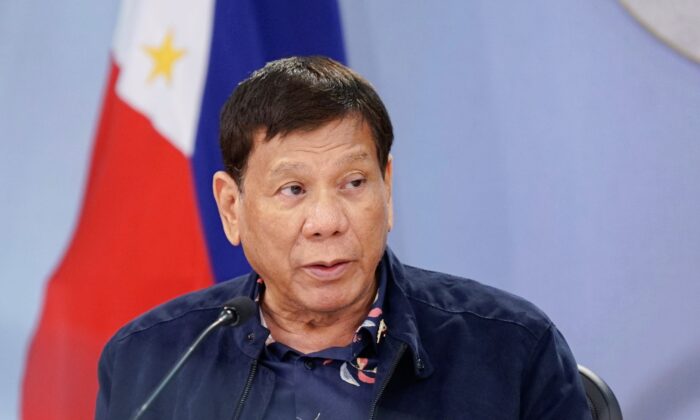 Philippine President Rodrigo Duterte on Tuesday has pulled out of the 2022 senate race to ensure “orderly and peaceful elections,” Duterte’s acting spokesman said, following his preferred successor’s official withdrawal from the presidential race.

Duterte, 76, is barred by the Philippines constitution to seek reelection as president. He announced his retirement from politics in October, before making a last-minute entry into the senatorial race.

A spokesman for the Commission on Elections office, James Jimenez, said in a tweet that “the President has filed his withdrawal from the Senatorial elections,” which came just hours after his close aid, Sen. Christopher “Bong” Go, formally quit the presidential race on Tuesday.

Duterte decided to drop out of next year’s elections as he wants to “better focus” on the government’s pandemic response and to ensure “orderly and peaceful elections,” his acting spokesman Karlo Nograles said in a statement.

“The President believes that withdrawing from the senate race will allow him to better focus on managing our pandemic response in order to sustain the progress we have made in the country and in safely reopening the economy,” Nograles stated.

Nograles also claimed that Duterte “plans to retire from the government to spend more time with his family when his term ends in June 2022.”

Meanwhile, Duterte’s daughter, Sara Duterte-Carpio, is running for vice president alongside the son of the late dictator Ferdinand Marcos, who has emerged as an early frontrunner. His son Sebastian is running for mayor of Davao City.

Duterte was elected in 2016 on a promise to eradicate drugs in the Philippines, initiating a “war on drugs” campaign that has resulted in the deaths of thousands of people.

According to official data, at least 6,181 people had been killed in more than 200,000 anti-drug operations since July 2016. The International Criminal Court (ICC) prosecutors estimate the figure of deaths to be between 12,000 and 30,000.

In September, the ICC authorized an official probe into his anti-drug campaign, but it was later suspended after Manila filed a deferral request.

Duterte maintains that the ICC has no jurisdiction to indict him, and asked his interior department to produce a drug war report on the amount of illegal drugs seized, particularly methamphetamine drugs, locally known as shabu, throughout his term as president to present to the ICC.

“Maybe when the time comes, we will use it to show to the ICC that the reason why we are not—I am not going to bow down to their [ICC] jurisdiction is because they would see the enormity of the problem of shabu in the country,” he said on Monday, according to state media Manila Bulletin.