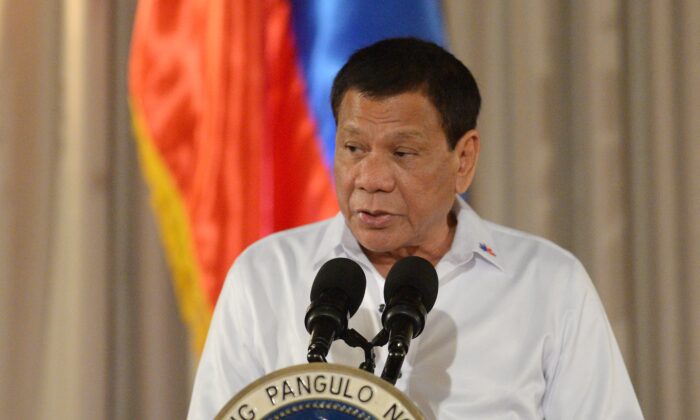 Philippine President Rodrigo Duterte delivers a speech during a ceremony at the Malacanang Palace in Manila, Philippines, on July 17, 2017. (Ted Aljibe/AFP via Getty Images)
Asia & Pacific

Philippines’ Duterte Not Open to Military Pact With China: Spokesman

Philippine President Rodrigo Duterte brushed off the possibility of forming a military alliance with China, just over a week after he announced the termination of a 2-decade-old Visiting Forces Agreement with the United States (VFA), his spokesperson said on Feb. 21.

Duterte decided to pull the plug on the troop rotation pact with the United States on Feb. 11, to enable the Philippines to be more independent in its relations with other countries, his spokesman Salvador Panelo said.

When asked if the president would consider seeking a defense treaty with Beijing, Panelo said Duterte is not interested in forging military pacts with other nations.

“No,” the spokesman said, reported ABS-CBN News. He previously said Duterte would not “entertain” any initiative from the U.S. government to salvage the VFA.

“Neither will he accept any official invitation to visit the United States,” Panelo said last week.

The VFA is important to the overall U.S.-Philippines alliance and sets out rules for U.S. soldiers to operate in the Philippines, a former U.S. territory. It underpins what Washington has called an “ironclad” relationship despite Duterte’s complaints about U.S. hypocrisy, ill-treatment, and aging weapons.

Duterte says the United States uses the pacts to conduct clandestine activities like spying and nuclear weapons stockpiling, which he says risk making the Philippines a target for Chinese aggression.

The decision to terminate the agreement was sparked by the revocation of a U.S. visa held by Ronald dela Rosa, a former police chief who led Duterte’s bloody war on drugs. Panelo said the cancellation of dela Rosa’s visa was “the last straw that broke the camel’s back.”

Panelo also said Duterte’s decision was a consequence of U.S. legislative and executive actions that “bordered on assaulting our sovereignty and disrespecting our judicial system.”

Duterte pressed ahead with the termination despite a Senate hearing on the VFA earlier this month during which his senior generals and defense and foreign ministers spoke in favor of it.

U.S. Defense Secretary Mark Esper called the decision “unfortunate” and said it would be a move in the wrong direction at a time when Washington and its allies were trying to press China to abide by “international rules of order” in Asia.

News of its termination has raised concerns it could damage Washington’s future interests in maintaining an Asia-Pacific troop presence amid security concerns about China and North Korea.