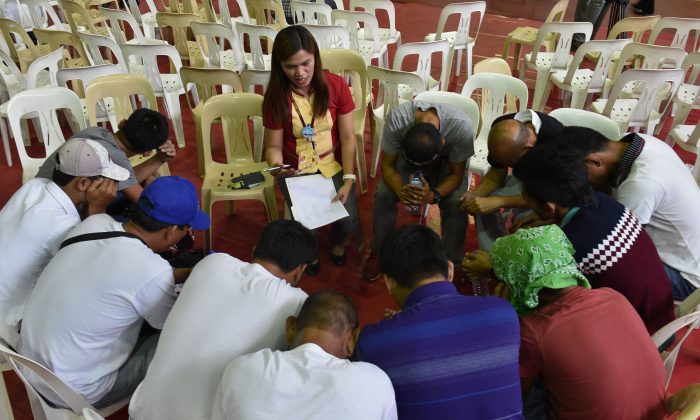 A social worker gives counselling to those who have turned themselves in during a mass surrender of some 1,000 alleged drug users and pushers in the town of Tanauan, south of Manila, as part of Philippine President Rodrigo Duterte's controversial drugs war. (TED ALJIBE/AFP/Getty Images)
Asia & Pacific

Philippines’ Duterte ‘Not Afraid of Human Rights’ in Drugs Crackdown

Human rights are not a concern in Philippine President Rodrigo Duterte’s war on drugs, he said, as he vowed to ignore due process and compared himself to Ugandan dictator Idi Amin.

Duterte’s threat came as the International Commission of Jurists (ICJ) joined the chorus of groups criticising Duterte’s advocacy of killing.

In the latest of a series of tirades, the country’s newly elected leader doubled down on a promised campaign of widespread killings and said he wouldn’t listen to “bleeding hearts”.

“I will retire with the reputation of Idi Amin,” he said in a speech on Sunday, July 17th, referring to the late African ruler whose 1971-1979 regime was characterised by large-scale rights abuses that killed tens if not hundreds of thousands of Ugandans.

“I am not afraid of human rights [concerns]. I will not allow my country to go to the dogs,” Duterte said, vowing to pardon all abuses committed by security forces.

Duterte swept to power on May 9th after pledging to end crime in the Philippines using the same “shoot-to-kill” methods critics say he employed as mayor of the southern city of Davao.

Police on Monday unveiled plans for a large electronic billboard outside the force’s Manila headquarters to broadcast a running tally of drugs suspects who have been arrested or “neutralised” – killed – during operations.

The billboard will “give everyday people … the accomplishments of their police,” community relations chief Senior Superintendent Gilberto Cruz told AFP.

The billboard, which was ordered by Duterte and the police leadership, will likely be completed by September, he added.

In a public statement, the Bangkok office of the ICJ criticised Duterte, saying “there has been a marked increase in the number of deaths of alleged drug dealers from the day you assumed office”.

“We are also concerned about your recent statements that appear to be encouraging extra-judicial killings,” the non-government organisation of judges and lawyers said.

The group reminded him that the Philippines had passed laws and signed international agreements binding it to work against police abuse, extra-judicial killings, and the death penalty, which Duterte hopes to restore to the country.

Major TV network ABS-CBN said it had recorded 408 “drug fatalities” between May 10th and July 15th, based on police and media reports.

Images of people killed in police anti-drug operations, or corpses found with signs saying things like “I am a drug pusher”, have become daily fare in the local newspapers.

A former addict told AFP on Monday that he had handed himself into police as part of an official mass drug amnesty event after two acquaintances turned up dead.

“I could be killed. That really scared me,” he told AFP.