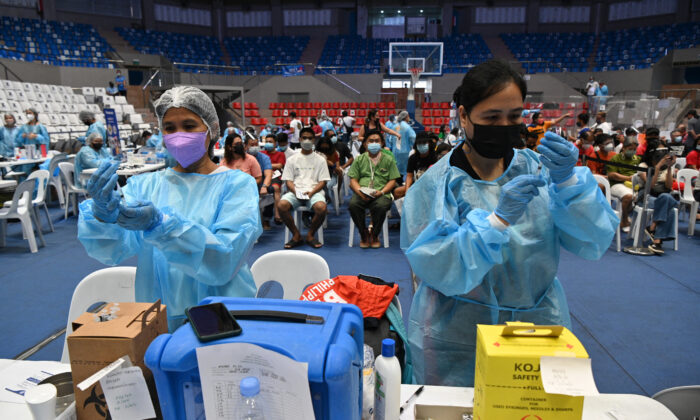 The Philippines’ government has shortened the interval for the administration of COVID-19 booster shots from six months to three months, the health ministry said on Tuesday, following the detection of a third Omicron case in the country.

Adults are now allowed to get their booster shots three months after the second dose of a primary two-dose vaccine, or two months after a single dose, the ministry said in a statement.

“We are exploring all possible options to safely mitigate the effects of more transmissible variants of COVID-19. The approval came at an opportune time as several countries also re-strategize in light of the Omicron and other COVID-19 variants that may emerge,” Health Secretary Francisco Duque said.

A growing list of countries, including South Korea, the United Kingdom, Thailand, and Germany, are shortening the interval for boosters to try to stave off a new surge of infections.

Duque also called on those who are unvaccinated, particularly senior citizens and people with underlying medical conditions, to get vaccinated as they are more vulnerable to having severe virus infections.

“Ensuring enough coverage of the primary series while adhering to the minimum public health standards are crucial if we want to maintain low to minimal risk classification and have adequate health systems capacities, especially during the holiday season,” Duque said.

The Philippines administered its 100 millionth dose of the vaccine on Dec. 17, with over 43 million people, or 55.78 percent of its population fully vaccinated.

The country reported its first two Omicron cases on Dec. 15, a returning overseas Filipino who arrived from Japan on Dec. 1, and a Nigerian who landed in the Philippines on Nov. 30. Both of them were described as asymptomatic.

The third Omicron case was confirmed on Tuesday, a 36-year-old Filipino man returning from Qatar who arrived at the Mactan-Cebu International Airport on Nov. 28.

Health Undersecretary Maria Rosario Vergeire said the patient’s sample was tested on Dec. 4 and came back positive the next day, but he later tested negative for the virus on a repeat test on Dec. 19, reported the state-run Philippine News Agency.

“The case completed his isolation in Cebu before traveling back to Cavite, his hometown, where he immediately self quarantined upon arrival. The case is currently finishing his home quarantine in Cavite and has remained asymptomatic since his arrival,” Vergeire said.

The authorities are currently in the process of identifying possible close contacts of the case, particularly those who boarded the same flight as the patient, Vergeire noted.