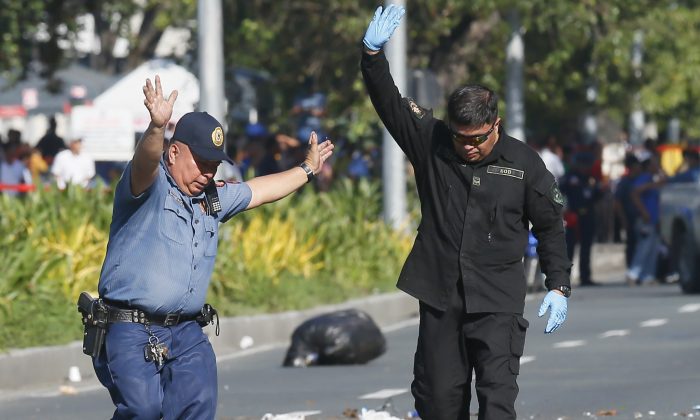 Philippine National Police bomb disposal squad members pause to retrieve a cellphone as they comb the scene after detonating a package believed to be suspected IED or Improvised Explosive Device that was found in the trash bin near the U.S. Embassy in Manila, Philippines on Nov. 28, 2016. (AP Photo/Bullit Marquez)
International

MANILA, Philippines—An improvised bomb found Monday in a trash bin near the U.S. Embassy and detonated by police has the same design as one used by local sympathizers of the ISIS terrorist group in a Sept. 2 bomb attack that killed 15 people in southern Davao city, the Philippine police chief said.

National police chief Director-General Ronald dela Rosa told a news conference that police are theorizing that Maute militants could be behind Monday’s “attempted act of terrorism” that appeared to target the U.S. Embassy.

The improvised bomb fashioned from an 81-mm mortar round, cellphone, blasting cap and a small battery could have been powerful enough to kill people within 100 meters (110 yards), police officials said.

“After analysis, we can link it to the Maute because of what happened in Davao, the same (bomb) signature,” dela Rosa said.

He said the Maute group may have wanted to create a diversion as it has been suffering heavy casualties in ongoing military and police operations in the south.

Senior Supt. Joel Coronel, the Manila city police chief, said they were checking security cameras in the area and seeking information from at least two eyewitnesses.

The trash bin where the device was found was about 20 meters (22 yards) from the embassy compound.

Philippine troops, backed by bomber aircraft, have recently attacked the Maute militants, including an operation launched last Thursday based on intelligence reports that the group was continuing to make bombs after the Sept. 2 bombing in Davao city, the president’s hometown, military spokesman Brig. Gen. Restituto Padilla said.

Military officials say that the militants, a loosely organized group that has more than 200 members, were initially affiliated with an Indonesian terror suspect but have lately used black flags and arm and head bands with Islamic State group symbols in a possible attempt to gain support from the Middle East-based group.