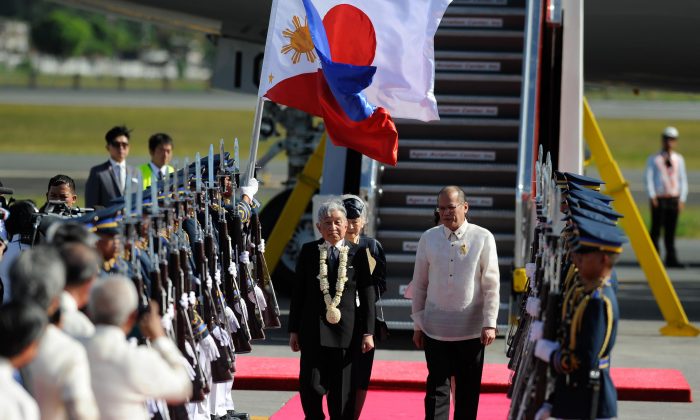 MANILA, Philippines—Philippine President Benigno Aquino III gave a red-carpet welcome to Japan’s emperor Wednesday in a sign of blossoming ties between the two nations, both mired in territorial disputes with China, while further moving past painful memories of Japan’s World War II aggression.

Aquino and Emperor Akihito held talks at Manila’s Malacanang presidential palace, where Philippine and Japanese flags were displayed side by side and Filipino troops fired cannons in a traditional salute. Aquino is to host a state banquet later for Akihito, whose visit marks 60 years of diplomatic relations between the two nations.

Akihito, a revered symbol of Japanese unity who plays no political role in his country, does not plan to discuss contentious security issues such as the territorial disputes or demands for an apology by Filipino women who accuse Japan’s wartime army of forcing them into sexual slavery, according to the emperor’s press secretary, Hatsuhisa Takashima.

During the meeting with Aquino, “there was no mention of the war,” he told reporters.

But Takashima said it was well known to Aquino that the emperor had earlier expressed his “profound remorse for the loss of lives of many Filipinos” during the war and that “the Japanese people must remember the agony and difficulty suffered, experienced by Filipino people.”

Asked if an apology could put an ending to the issue of wartime sex slaves, Takashima said it was not the emperor’s role to address individual subjects related to the war, but that Akihito “always mentions the necessity of peace and the stability of the international relations as well as (to) never forget the war and never forget the victims of the war.”

Relations between Japan and the Philippines have improved dramatically in the seven decades since the war, with Japan becoming a major trading partner and aid donor for the Philippines. Akihito’s visit is seen as a strong sign of a further deepening of ties as the countries, both close American allies, confront China over long-contested maritime territories.

Japan’s Self-Defense Forces have staged joint search and rescue exercises with the Philippine navy near the disputed South China Sea and are providing the Philippines with coast guard patrol boats.

Still, six elderly Filipino women led a protest outside the presidential palace Wednesday asking the Japanese government to formally apologize and compensate them and other sex slaves abused by Japanese forces during the war. They carried placards reading, “No to rising Japanese militarism.”

He said it is still important to push Japan to deal with the remaining issues from its wartime aggression.

“We should forgive but we should not forget the past. That will also help Japan,” Heydarian said.

Akihito is to pay his respects at memorials for both Philippine and Japanese war dead during his visit, which ends Saturday.