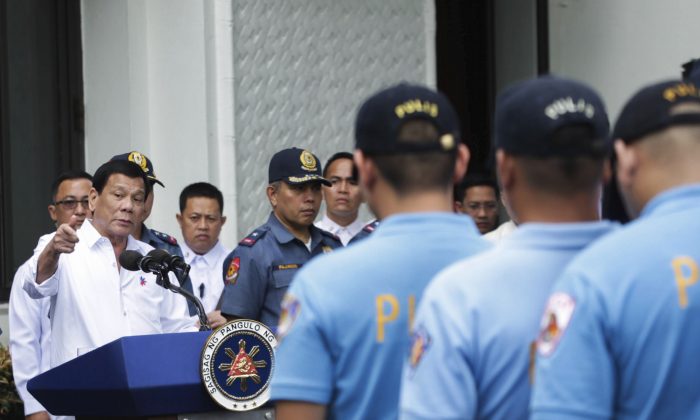 MANILA, Philippines—Philippine President Rodrigo Duterte berated more than 200 policemen accused of a variety of offenses, threatening on national television on Feb. 8 that he would send them to a southern island to fight terrorists dreaded for beheading their captives.

Duterte’s expletive-filled outburst against the officers at Manila’s presidential palace was his latest tirade against a police force that he has called “rotten to the core.” He recently banned the national police from carrying out his anti-drug campaign after a group of officers used the operations as a cover to kidnap and kill a South Korean man in an extortion scandal.

The 228 policemen from metropolitan Manila are accused of a range of administrative and criminal offenses, including extortion and illegal arrests. Some have tested positive for drug use, regional police spokeswoman Inspector Kimberly Molitas said.

Duterte, who was a longtime crime-busting city mayor and government prosecutor before he took office last June, said he had wanted to punish the policemen by ordering them to clear the murky Pasig River by the presidential palace of water lilies, but that the river was clear of lilies.

So he ordered them instead to prepare in two weeks for a two-year deployment to Basilan Island, the birthplace of the brutal Abu Sayyaf terrorist group, where he said some police stations have been blown up by the terrorists.

“If you survive, come back here,” Duterte told the policemen, who were made to stand in the sun before him outside the Malacanang palace. “If you die there, I’ll tell the police not to spend to bring you here and just bury you there.”

Duterte said the policemen can opt to resign but warned them about getting involved in criminal syndicates like some former police and military personnel.

“I will create a battalion just to keep track of your movements because it has been the sad experience of this country that the most vicious criminals are mostly ex-police, or sometimes, ex-military men,” he told the policemen, who stood with their heads bowed.

“Sorry, I won’t think twice, you would really be the ones to go down in extrajudicial killings,” said Duterte, who stood beside top police officials.

Some rogue policemen have extorted money from street vendors and ordinary Filipinos, while others have killed drug dealers, then seized and sold their methamphetamine (a strongly addictive stimulant locally known as shabu), and pocketed the money, Duterte said.

“If you’re mad at me, wait until my presidency ends, then let’s go into a gunbattle,” said the president, who started his six-year term in June.

Duterte abruptly ended his talk to lead a Cabinet meeting, but asked the policemen to wait for him under the sun.

More than 7,000 suspected drug dealers and addicts had been killed in Duterte’s anti-drug crackdown before he prohibited the 170,000-strong police force from serving as the main enforcer of the campaign last week amid the scandal over the South Korean businessman’s murder.

Troops will be tapped to temporarily replace the policemen, Duterte said, prompting human rights groups to express alarm due to what they say is the military’s equally notorious image.