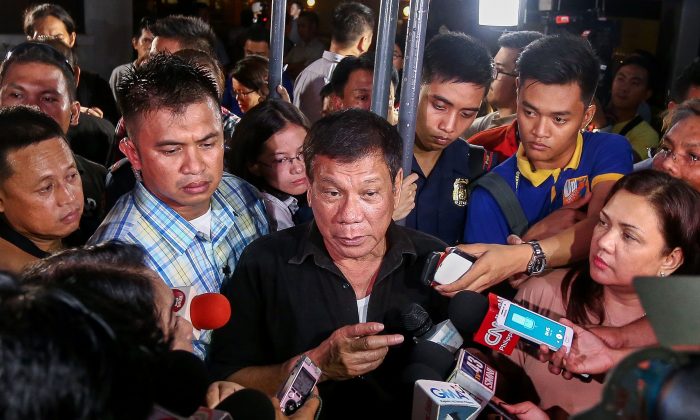 President Rodrigo Duterte, who has vowed to end crime within six months of taking office on June 30, also said late Sunday that he would not hesitate to grant presidential pardons to law enforcers accused by human rights advocates of abusing their authority in cracking down on narcotics, as long as the soldiers and police involved tell the truth and do not fabricate evidence.

After Ruling on Maritime Dispute, Beijing Tries to Curry Favor With Philippines

Duterte made the comments amid an outcry from rights advocates about the deaths of at least 212 suspected drug traffickers in confrontations with law enforcers since he won the May 9 presidential election.

In the town of Tanauan, south of Manila, around 1,100 drug dealers and users voluntarily surrendered to authorities Monday at a packed gymnasium, where they pledged to reform and report regularly to their village leaders after filling out forms and having their mugshots and fingerprints taken. They were also given counseling in groups by social welfare officers.

KC Saniano, Mayor Antonio Halili’s chief aide, said 1,279 people were invited after their names were on a list of drug dealers and users gathered by intelligence agents and village officials. Only around 1,000 of those invited showed up, but another 100 not on the list voluntarily surrendered.

Halili warned those who were invited but did not show up, “I cannot assure your safety anymore.”

Duterte said 72,000 people have already surrendered since his administration launched the crackdown. He said many of the unclaimed bodies of suspected drug criminals were Chinese nationals.

“That’s my lamentation,” he said in a video released by his office Monday. “One day I will ask China, Why is the situation like this? I won’t say why are you sending them, but why is it that most of the guys who come here do drugs, even inside jail?”

Duterte said he will prepare pre-signed presidential pardons, adding, “I will not hesitate to pardon 10, 15 military and policemen every day.”