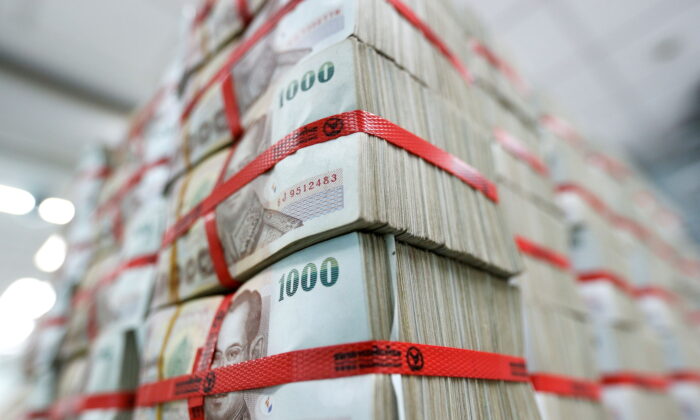 Thai baht notes are seen at a Kasikornbank in Bangkok, Thailand, on May 12, 2016. (Athit Perawongmetha/file/Reuters)
Asia & Pacific

The change, which had been widely anticipated by analysts, followed a 25-basis-point rise in May, the country’s first interest rate increase since 2018.

Overnight deposit and lending facilities were raised to 2.0 percent and 3.0 percent respectively, according to the Monetary Board’s statement.

“The Monetary Board noted that upside risks continue to dominate the inflation outlook up to 2023, with pressures emanating from the potential impact of higher global non-oil prices, the continued shortage in domestic fish supply, as well as pending petitions for transport fare hikes due to elevated oil prices,” it stated.

Inflation in the country surged to 5.4 percent last month, while the Philippine peso fell to its lowest level in more than three and a half years, plunging about 6 percent this year.

The Monetary Board upped its inflation forecast to 5.0 percent this year and 4.2 percent in 2023, exceeding the central bank’s target range of 2 to 4 percent. It also projected inflation to fall to 3.3 percent in 2024.

“The Monetary Board believes that a follow-through increase in the policy rate enables the BSP to withdraw its stimulus measures while safeguarding macroeconomic stability amid rising global commodity prices and strong external headwinds to domestic economic growth,” it stated.

It also reaffirmed support for “the carefully coordinated efforts of other government agencies as part of a whole-of-government approach in implementing non-monetary interventions to mitigate the impact of persistent supply-side factors on inflation.”

The move came on the heels of the U.S. Federal Reserve’s decision last week to raise its interest rate by 0.75 percent, the largest increase since 1994 and the third increase this year, to counter the country’s inflation.