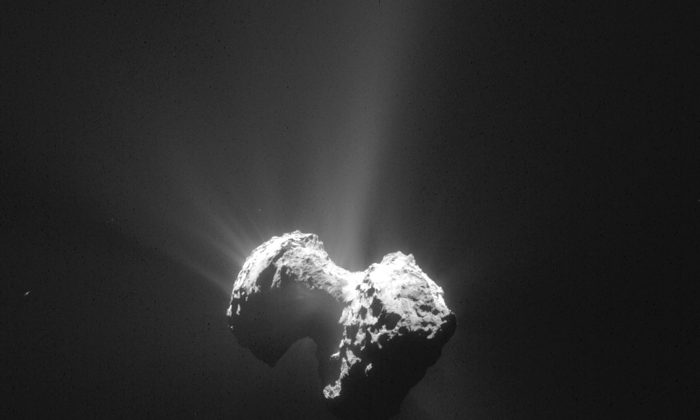 The July 20, 2015 photo released by the European Space Agency ESA on Tuesday, July 28, 2015 shows an image of the comet 67P/Churyumov-Gerasimenko with its coma taken by the Navcam camera of the Rosetta orbiter from a distance of 171km (106 miles) from the comet center. (AP Photo/ESA/Rosetta/Navcam)
Science

Philae Probe Finds Evidence That Comets Can Be Cosmic Labs

BERLIN—Scientists say the Philae space probe has gathered data supporting the theory that comets can serve as cosmic laboratories in which some of the essential elements for life are assembled.

Philae, which is part of the European Space Agency’s Rosetta mission, used two separate instruments to “sniff” for molecules during its bumpy landing on comet 67P/Churyumov-Gerasimenko last November.

In an article published July 30 in the journal Science, researchers said they spent months analyzing the data and concluded that 67P contains at least 16 organic compounds. Four of them, including acetone, hadn’t been detected on a comet before.

“Comets are loaded with all the raw materials like water, CO2, methane, ammonia, needed to assemble more complex organic molecules, perhaps sparked by UV-photons from the sun or cosmic rays, or in the shock that occurs when a comet hits the surface of a planet like the young Earth,” said Mark McCaughrean, a senior scientific adviser at the European Space Agency.

It’s not yet known whether the complex molecules found in 67P were made in the early solar system and then incorporated into the comet or formed there later, he said. “Either way, it seems that comets are pretty good places to find the building blocks of molecules, which later on could be used for life.”

McCaughrean, who wasn’t directly involved in the study, dismissed recent reports that evidence of life itself had been found on the comet. But he said the prebiotic compounds that were detected might be coaxed into even more complex molecules such as amino acids, including by a planetary impact.

Proteins, fundamental to living organisms, are made from long chains of amino acids, and the simplest one, glycine, was even detected in material collected from the tail of another comet by NASA’s Stardust mission a few years ago.

The Philae scientists have not found any amino acids on 67P yet, but that’s not to say they aren’t there. As Philae was only able to perform experiments for 60 hours before its batteries were depleted, scientists were unable to complete some of the work they had hoped to carry out.

The space probe woke up from hibernation last month, but the German space agency DLR that operates Philae has not yet been able to establish a robust connection to restart the scientific experiments. Still, scientists are hopeful that this will be possible as the probe and its mother ship Rosetta, which is orbiting the comet, accompany 67P on its journey through space.

The next important event in the mission will take place on Aug. 13, when the comet comes closest to the sun, a point known as perihelion.

Along with their findings on the comet’s chemical composition, scientists also published new insights about its rocky terrain and its unexpectedly hard surface, which may prove crucial to future comet missions.

“We have definitely learned at least one thing with this first comet landing: Bouncing is a bigger problem than a possible sinking into the ground,” said Philae to project manager Stephan Ulamec.