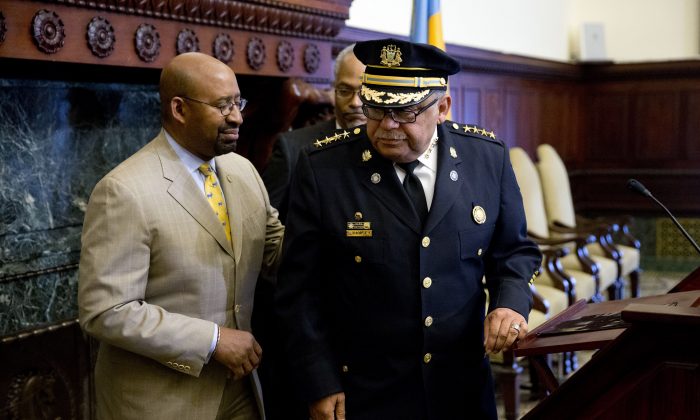 PHILADELPHIA— Police Commissioner Charles Ramsey, who emerged as a national leader on community policing amid tensions between officers and those they protect, announced Wednesday he will retire after a 47-year law enforcement career that also included stints in his native Chicago and Washington.

“I came out of retirement to come to Philadelphia and work for him, and I’m honored to be able to leave with him as well,” Ramsey said. “A leader is only as good as the people working for him, and we have an outstanding group of individuals in the department.”

Ramsey indicated Wednesday that this retirement could also be temporary, hinting at a move to the national level.

“I’m not tired. I’m not burnt out. I’m actually in my prime,” Ramsey said.

Former City Councilman Jim Kenney, the front-runner to replace Nutter, has said he would select his police commissioner from within the department. He declined to comment Wednesday, saying through a spokeswoman that it was a day to celebrate Ramsey.

Ramsey, 65, first attracted national attention in Washington as his department investigated the 2001 disappearance and death of intern Chandra Levy.

He later drew criticism in the nation’s capital for a series of traffic stops where the city’s officers collected personal information from random motorists and for the mass arrests of protesters at a World Bank meeting in 2002.

In Washington and Philadelphia, he presided over major drops in crime.

The number of homicides in Philadelphia fell from 391 in 2007, the year before Ramsey became commissioner, to 248 last year. This year has already eclipsed last year’s murder rate, with 216 as of Tuesday. From 2008-14, there were an average of 299 killings per year.

Crime rates in Washington fell about 40 percent during his 1998-2006 tenure, with community policing, improved hiring practices and better training and equipment cited as reasons for the improvement.

Ramsey also established a 3-1-1 non-emergency reporting system and established a website to make crime information reports available to the public.

Ramsey started outfitting Philadelphia’s officers with body cameras in January, has moved more officers onto foot and bicycle patrols in crime-ridden communities and broadly expanded the department’s use of surveillance video and social media.

President Barack Obama appointed Ramsey co-chairman of the policing task force he formed after the fatal police shooting last summer of 18-year-old Michael Brown in Ferguson, Missouri. The panel has recommended dozens of changes in training, transparency and outreach, many of which Ramsey said Philadelphia would implement.

Nutter called Ramsey the nation’s best commissioner and said he changed the culture of the city’s policing and created a “very strong and sturdy foundation for the future.”

“Thank you for coming to Philadelphia and thank you for making my city a safer city,” Nutter said.

Ramsey has been criticized for the department’s use of stop and frisk— a tactic Kenney wants ended.

Ramsey said he only supports lawful stops called Terry stops, named after a 1968 Supreme Court ruling upholding an officer’s right to pat down a person suspected of criminal activity. There is no department policy encouraging stop and frisk, he said.

Ramsey joined the Chicago Police Department as an 18-year-old recruit in 1968. He rose through the ranks to become Chicago’s deputy superintendent of police.

Ramsey had been tasked with hiring more black officers in Philadelphia where 44 percent of residents are black.

The reviews were mixed.

This summer, the Philadelphia Daily News reported that more than 1,200 officers had been hired under Ramsey, nearly two-thirds of them white. Black officers accounted for 248 of the new hires, with about 15 percent being Hispanic, Asian or other races.

Ramsey said finding qualified black candidates had become increasingly difficult because of a requirement that recruits have 60 college credit hours.