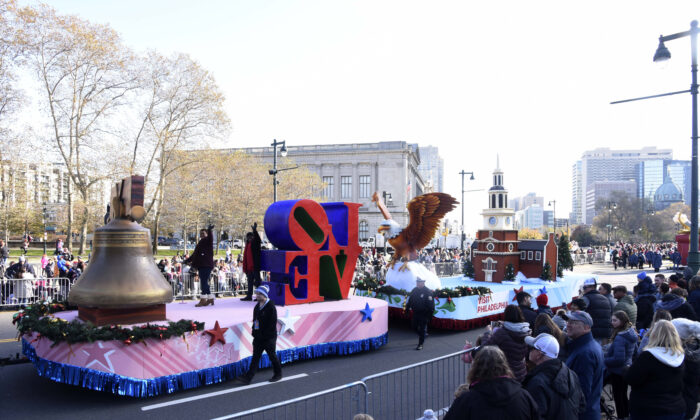 Cheerful crowds on the Benjamin Franklin Parkway watched the three-hour parade, which was the city’s 103rd such event.

“I love Thanksgiving, a great holiday,” said Howell, who watched the parade with his family.

“We live in this great land of America. That’s a land of freedom and liberty,” he said. “We’re grateful to our Creator, to God, our heavenly father, who’s blessed us with all things, and just grateful to be here with all our brothers and sisters.”

“I think it’s important every day that we take a moment to express gratitude for all of the many things that we have,” Howell said.

“I think living in gratitude is maybe the most important character trait that we could try to develop in our lives. If we’re grateful, then all other great qualities will follow.”

The Mayor of Philadelphia, James Kenney, told The Epoch Times that Thanksgiving is one of his favorite holidays.

“Because there’s really nothing to get all intense about or to get all crazy about. It’s a nice calm day. You’re with family or with friends. It’s turkey and football. And you take a nap later.”

Kenney said he is very thankful for our country “where you can have what you need, you can earn what you need.”

“And then there are also opportunities to help people who are in need, and this is what groups like this do. And they do it well, and they’ve been doing it for years.”

The group that Kenney was referring to was the Metropolitan Area Neighborhood Nutrition Alliance (MANNA), which had volunteers near the parade’s start site, delivering Thanksgiving meals to 4,000 people in critical or serious illness in Greater Philadelphia.

Thanksgiving in America is based on a 1621 autumn harvest feast shared by the English Pilgrims of Plymouth and the Wampanoag people.

In 1863, President Abraham Lincoln made Thanksgiving a national holiday which has since been held on the fourth Thursday of November each year.