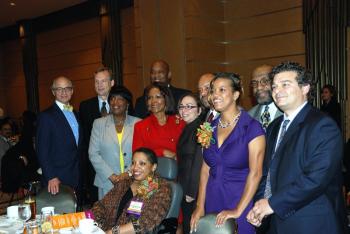 Lily Sun
View profile
Follow
biggersmaller
Print
PHILADELPHIA—Awards were accepted at the fifteenth Philadelphia Multicultural Affairs Congress luncheon Oct. 29. The luncheon was a celebration of people who have helped shape Philadelphia into a multicultural destination for tourism, meetings, and conventions.

Several of the 500 attendees received individual recognition for their contributions to Philadelphia's business, tourism, hospitality, and community sectors.

Cheryl McClenney-Brooker, the Museum of Art's director of external affairs received the Share the Heritage Award. A documentary of her work over the past 40 years was shown, and it visibly moved many attendees at the Loews Philadelphia Hotel.

“Furthering our efforts to increase the City’s ability to attract and retain multicultural meetings and conventions,” she said. “It is with great enthusiasm that our 15th Annual Recognition Luncheon coincides with our 2009 banner year of hosting more than 25,000 attendees at the nationally recognized Global Fusion Festival.”

MAC is a subsidiary of the Philadelphia Convention and Visitors Bureau. Founded in 1987, MAC was originally called the Minority Advisory Council and helped Philadelphia tap the estimated $30 billion market for African-American conventions and tourism nationwide.

By 1990, the U.S. Department of Commerce, Travel and Tourism Administration named Philadelphia as the top city for minority tourism. Philadelphia is now also among the top 10 cities for Hispanic travelers.