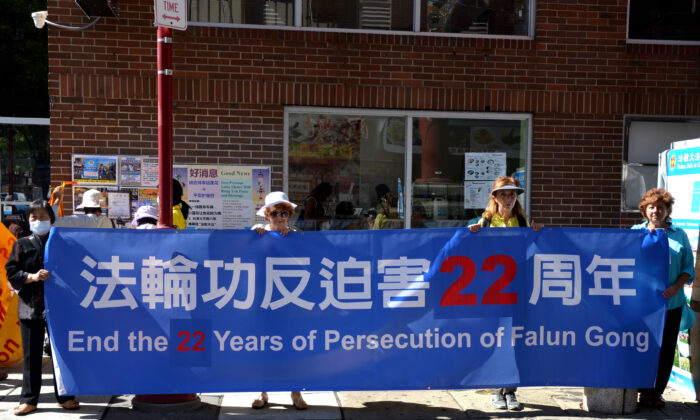 People participate in a rally to denounce the Chinese Communist Party (CCP) and encourage Chinese people to withdraw from the CCP and its affiliated organizations, in Philadelphia Chinatown, on Sept. 26, 2021. (Frank Liang/The Epoch Times)
Regional News

PHILADELPHIA—A rally in Philadelphia Chinatown on Sept. 26, denouncing the Chinese Communist Party (CCP) and encouraging Chinese people to withdraw from the CCP and its affiliated organizations, drew support from the Pennsylvania House of Representatives and residents.

The gathering was to reject the CCP and expose the evils it has committed, according to Alex Luchansky, the event organizer and software engineer manager at a financial company. During the rally, he said that the CCP operates like a transnational criminal organization. Since it took over China, hundreds of millions of people have been suffering from its endless deceptions and brutality.

“This pandemic, COVID-19 or CCP Virus, could have been prevented if the CCP did not lie, and now its terror has spread globally, affecting everyone,” Luchansky added. “It is time for us to stand up against its evil deeds and sever all ties with the CCP.”

The Pennsylvania House of Representatives issued a citation for the event, sponsored by State Rep. Mary Isaacson (D-Philadelphia), which applauded 382 million people who have quit the CCP for “the positive step to secure their future, also for the safety they bring to the U.S. and the rest of the world.”

The citation noted that the CCP has killed over 80 million Chinese people through numerous political campaigns in the last 70 years, including the Cultural Revolution, the Tiananmen Square Massacre, the persecution of Falun Gong, the suppression of Uyghurs, and retaliation at recent protests in Hong Kong.

“Falun Dafa practitioners, who make up the largest group of persecuted people in China, have been illegally imprisoned and severely tortured for the last 22 years,” the citation stated. “Many have been killed through the government’s program of forced organ harvesting.”

Adherents of Falun Gong, an ancient Chinese spiritual practice also known as Falun Dafa, have been persecuted by the Chinese regime since 1999, which allegedly began harvesting organs from detained Falun Gong practitioners for profit soon after that.

The citation also acknowledged the significance of rejecting the CCP. While the CCP poses a significant threat to the United States and other countries, “people who are no longer affiliated with the CCP and understand the values of democratic ideals will not assist the CCP in its subversion and infiltration activities, thereby lessening the threat the CCP poses to the international community.”

The message of decoupling the CCP was echoed by Philadelphia resident Dr. Jessica Russo, who spoke at the rally.

“In the U.S. [and around the world], the CCP has subverted our educational system, our workplaces, our government, and our media,” said Dr. Russo. “So it is not just the Chinese people who are suppressed, but all of humanity.”

“Thus, it is imperative not only for the Chinese people to engage in rejecting the CCP, but it is also critical for all of us. Every organization, every corporation, every citizen and resident of this country and every other country must say no to the CCP.”

“We must all reject the CCP so we can be free,” said Dr. Russo.

Human Rights advocates at the rally called on governments and the public to support the effort to end China’s state-sanctioned practice of forced organ harvesting.

“Evidence first emerged in 2006 that organs were being removed from the bodies of living prisoners of conscience for transplantation into cash-paying patients from China and around the world,” said Dr. Ann F. Corson, who is editor-in-chief for the newsletter published by Doctors Against Forced Organ Harvesting (DAFOH).

Dr. Corson highlighted the tremendous efforts by courageous investigators from the fields of medicine, law, government, and journalism who have gathered a preponderance of evidence, “demonstrating that forced organ harvesting has been occurring throughout China on a massive scale for two decades, driving a lucrative transplant tourism industry.”

“In China, transplantation of vital organs can be booked in advance on a specific date and performed after short waiting times,” said Dr. Corson. “A captive, non-consenting organ donor pool waits for patients to arrive. Desperate patients from many countries, including the United States, have been lured to China by hospital websites and organ brokers promising matching organs in just two to four weeks. This is unheard of in the West where patients wait years for organs.”

In March 2020, the London-based independent China Tribunal concluded that “forced organ harvesting has been committed for years throughout China on a significant scale and that Falun Gong practitioners have been one—and probably the main—source of organ supply.”

Dr. Corson called on all members of the medical profession and the entire global community to advocate for an end to China’s forced live organ harvesting of Falun Gong practitioners and other innocent prisoners of conscience.

“If we accept the Chinese medical establishment as legitimate and ethical, we will be colluding with mass murderers,” said Dr. Corson.

Message Gets Across to the Public

The rally caught the attention of many who were passing by. Several people shared their thoughts and appreciated people’s courage in denouncing the CCP.

“I learned about all the things that China’s doing that are not being reported by the media. For example, what they’re doing to the Uyghurs [and] the fact that China is involved in organ harvesting,” Michael Smith, a government official, told The Epoch Times.

Smith said he had heard of the forced organ harvesting committed by the Chinese regime before but thought it was just an “urban legend.” “However, I did get information here that points [to] evidence that this is true.”

“It’s despicable, disgusting,” Smith said, and added that he needed to “get more involved in trying to raise awareness to see what can be done.”

“I don’t want to be a part of the whole thing that is happening,” Smith told the Epoch Times.“There’s something I heard a long time ago that if you don’t say anything, then you’re a part of it. So that’s my feeling. I must do something so that I’m not a part of it.”

Smith thought the rally was an excellent way to get the message across.

“I think a lot of times when you start small and at the grassroots level, that’s where you [make] the most significant impact that could change society. And I think that this is one step in that direction.”

“I would be more suspicious if suddenly there was like a multi-million-dollar campaign saying something,” said Smith, “I think everything starts in small steps.”

Brian Roenelt, a landscaper from Cherry Hill, New Jersey, also expressed his gratitude after being informed at the rally about the forced organ harvesting committed by the CCP.

“I can’t even put it into words how unfathomable [it is that] something like that is taking place,” Roenelt told The Epoch Times, “But there’s a lot of people that are just turning a blind eye, and it’s horrible.”

He said it was his “civil duty” to stop and listen to what the speakers said and their expression of the beliefs that we all share.

“The more people paying awareness to it … the better chance for change to take place,” Roenelt said, “so the few minutes it may take for someone to acknowledge what’s taking place could be what overall makes the vast outcome change and affects millions upon millions of people’s lives.”

At least 25 Chinese people decided to withdraw from the CCP during the rally, Luchansky told The Epoch Times.