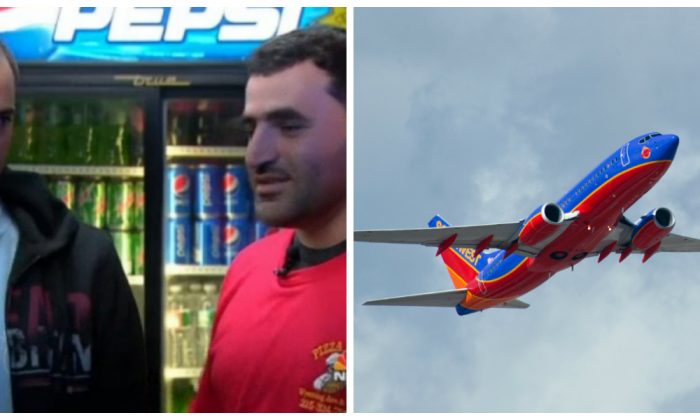 Two Americans say they were removed from a Southwest Airlines flight from Chicago this week because of profiling.

Maher Khalil and Anas Ayyad said they were asked to step aside during boarding because a fellow passenger overheard them speaking Arabic.

But the American citizens weren’t happy and insisted they be allowed on the plane.

“If that person doesn’t feel safe, let them take the bus,” Khalil said to a Southwest Airlines gate agent, according to NBC. “We’re American citizens just like everybody else.”

Khalil, 29, and Ayyad, 28, immigrated to Philadelphia from Palestine 15 years ago. They were visiting each other’s families in Chicago and met back at the airport.

“We were just chatting, like everybody else,” Khalil told the Associated Press. “I’m like: ‘Are you kidding me? Are you serious? Is this a prank or something?'”

After the gate agent told them they wouldn’t be allowed on board because of the fellow passenger’s fears, Khalil called the police. The flight was delayed as the men were questioned, but they were ultimately let on board.

Still, some passengers came over during the flight, suspicious of a box the men had with them.

“We’re walking down the aisle and I’d already told him [Ayyad] to smile and act like nothing was wrong. But then people kept asking me, ‘What’s in that box?!’ I was carrying a small white box. And the passengers made me open the box!” Khalil said. “So I shared my baklava with them.”

But Khalil says the situation never should have happened like it did.

“I swear, I never had that feeling before,” Khalil said. “I felt like we’re not safe no more in this country. Because I’m Arab, I cannot ride the airplane? The person who complained is the one who should be kicked out, not me.”