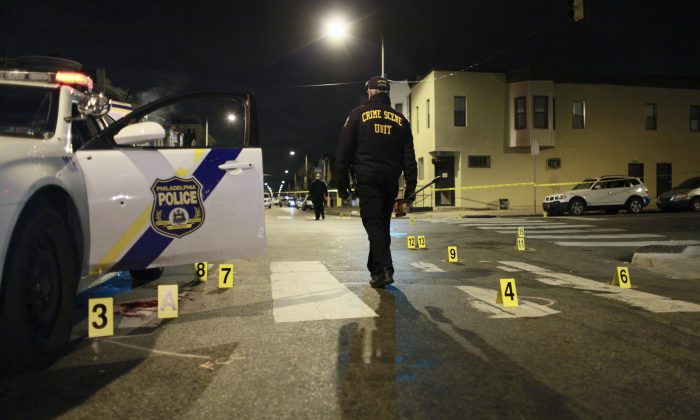 An investigator walks through the scene of a shooting Friday, Jan. 8, 2016, in Philadelphia. A Philadelphia police officer was shot multiple times by a man who ambushed him as he sat in his marked police cruiser, authorities said. (AP Photo/Joseph Kaczmarek)
US

PHILADELPHIA—A Philadelphia police officer was ambushed by a man while sitting in his marked cruiser, and was in stable condition Friday after being shot three times in his left arm, officials said.

“This is absolutely one of the scariest things I’ve ever seen,” Ross said at a news conference early Friday. “This guy tried to execute the police officer. The police officer had no idea he was coming.”

The suspect ran away but was quickly apprehended by other officers, authorities said.

Ross, who was sworn in as commissioner Tuesday, said there was no apparent motive for the attack.

“Why someone would do something so absolutely evil is just beyond us,” Ross said. “It’s amazing he’s alive.”

There was no immediate word on the suspect’s condition. Officer Christine O’Brien said the man was stuck at least once in the buttock.

Jim Kenney, who is in his first week as mayor of the nation’s fifth-largest city, said, “There are just too many guns on the streets and I think our national government needs to do something about that.”

His statement comes on the heels of President Barack Obama’s announcement on Tuesday of his plan to tighten gun control laws.