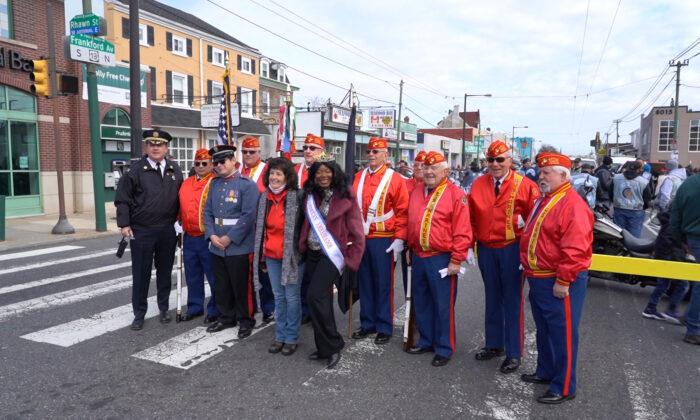 Philadelphia Neighborhood’s Thanksgiving Parade: Give Thanks to God

PHILADELPHIA, Pennsylvania—On Nov. 21, the Sunday just before Thanksgiving, the Mayfair-Holmesburg area of Philadelphia Thanksgiving celebrations had already begun with the neighborhood’s 44th annual Thanksgiving Day Parade, with more than 100 community organizations participating. During the parade, people from all backgrounds shared their gratitude for God.

Last year’s parade was canceled due to the COVID-19 pandemic, but this holiday season, the city is coming back to life. The parade was led by a motorcycle fleet, followed by local string bands, school marching bands, dance schools, community organizations, businesses of all kinds, and finished off by a fire truck carrying Santa Claus and Mrs. Claus together to celebrate Thanksgiving with the neighborhood.

John Lynch, a member of the Marine Corps League in Philadelphia, told NTD that he is proud to participate in the Thanksgiving parade “because it’s freedom, freedom of religion for America, and the thanks we give to God for all the good things that America has and America helps the world. ”

Lynch served in the Marine Corps during the Cold War period from 1960 to 1964, then served as a municipal and Federal Police Officer for 40 years. He was also involved with security and rendered honors at the funeral of the late President John F. Kennedy in Washington, D.C.

“I think Thanksgiving is important,” Lynch said. “And all people who come to America from all over the world have to learn to thank the Lord for the goodness that he has given us, and the freedoms we enjoy here in the United States of America.”

Tanya Amir, from west Philadelphia, earned the All-American Ambassador title in October. She sat in her car and continuously waved her hands to the crowd during the parade. “As an All-American Ambassador, I have the privilege and honor to travel the country and honor our troops,” Amir said. “The meaning for me is just praising God for everything that we have been blessed with throughout the year. That’s what Thanksgiving is. It’s about the family coming together. It’s about showing love to one another.”

The Grand Marshal of this year’s Thanksgiving Parade is from Pat’s Music Center.

Its owner Bob Domanico said he is very honored to be the Grand Marshal: “I’m thankful for all we have, health, world peace. And just to be here today.” Domanico’s family has owned Pat’s Music Center for 84 years, and he is the third generation. “[The] pandemic was very stressful. We couldn’t have the parade last year. So it’s nice to have it this year.” He added, “Thank God for everything.”

One of the main organizers of the parade, Lisa Greco shared the challenge to hold this year’s parade because some groups and businesses closed down due to the Pandemic, so they had to reconnect with new groups to participate and sponsor the parade. They are volunteers to help with this parade.

Some politicians also joined this neighborhood Thanksgiving parade for many years.

“I see a lot of people out on the street. It’s great to be back for this Mayfair-Holmesburg Thanksgiving Day Parade,” said Philadelphia city commissioner Lisa Deeley, who participated in the parade for the ninth or tenth year.

“This parade is a great Northeast Philadelphia tradition. There is so much to be thankful for,” Deeley said. “But above all, it’s our ability to come back as a nation, as a world actually, from the grips of the pandemic. Just we continue to look forward to everything getting back to normal as quickly as possible.”

Pennsylvania state Senator Christine Tartaglione has participated in the Mayfair-Holmesburg Thanksgiving Day Parade for 27 years. She said Thanksgiving means a lot to her: “We all should give God thanks that we’re here, we’re together, we have our family, and we have our freedom.” She hopes people “have a very happy, happy Thanksgiving, and they enjoy their families.”

Thanksgiving is a traditional American holiday. People generally regard the first Thanksgiving Day as beginning in 1621 when Americans had their first harvesting in the new land. During the American Civil War, President Abraham Lincoln set Thanksgiving by proclamation for the fourth Thursday in November as a national holiday in 1863. And he called on the American people “with humble penitence for our national perverseness and disobedience … fervently implore the interposition of the Almighty hand to heal the wounds of the nation.”