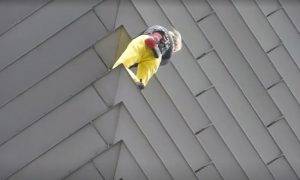 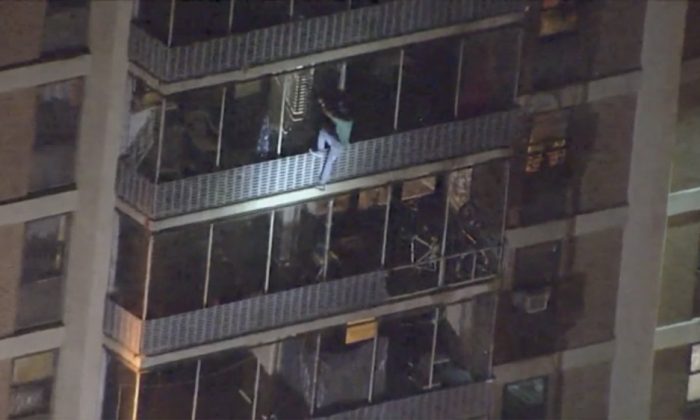 A Philadelphia man caught on camera scaling a building during a fire has spoken out about the feat, saying he did it to rescue his bedridden mother.

The 35-year-old, identified by his first name, Jermaine, told WPVI after scaling up the side of a 19-story building and then back down that he feared his mobility challenged mother was in danger.

Daredevil channeled inner Spider-Man to save his mom from fire https://t.co/LwcOJJWy8i pic.twitter.com/13FmvuiJxr

The blaze was reported at around 9:30 p.m. on July 18, and Jermaine said he got a call from his sister that their mother was stuck in her 15th-floor apartment.

He said when he got to the scene, the police were blocking the entrance.

The former roofer and construction worker said he’s had plenty of experience with heights.

“As kids, we used to jump roofs,” he told WPVI. “Glad I had the practice.”

Jermaine said he launched into the climb despite having an injured hip.

“All for my mom’s safety, period,” he told the station. “I wasn’t worried about mine at all. She can’t get out of the bed or walk around, so if there’s a fire she needs help out.”

He said when he reached his mother’s balcony, she told him she was safe and the fire had been contained. Then, Jermaine climbed back down.

Television crews captured Jermaine’s climb from helicopters. He said when his mother saw the footage, she was “shocked” but “not surprised.”

“She knows I’ll go above and ­beyond,” he said.

Jermaine added that the police were sympathetic of his impulse to rescue his mother.

“[An officer] told me if I didn’t leave, I was going straight to jail. Because that was his job. But, he actually did cut me a break,” Jermaine told WPVI. “He understood the circumstances. He knew when your adrenaline is pumping and your mom is up there, you’d do anything you can.”

Firefighters had the blaze under control within about an hour and all residents were able to escape the building. Some people with mobility issues were carried out by other residents.

Emergency responders also went to some individual units to ensure residents there had gotten out safely. In some cases, they made forced entry to the units.

Officials said buses were provided to give residents a cool place to stay on a hot and humid evening while firefighters worked to extinguish the blaze. Residents were allowed to return to the building later in the evening.

WPVI posted the story on its Facebook page, with many people posting emotional comments.

“God bless him for thinking of his mom at this terrible fire and wanted to make sure of her safety,” one person said.

“Glad this story had a happy ending, and especially happy the police officer was so understanding of the situation,” someone else commented.

But it was not all praise: “He became a liability and distraction in the authorities’ ability to manage this event. Every building has an evacuation and disaster plan known to the professionals. What was his thought? Drag her on a mattress down 15 flights of stairs?”