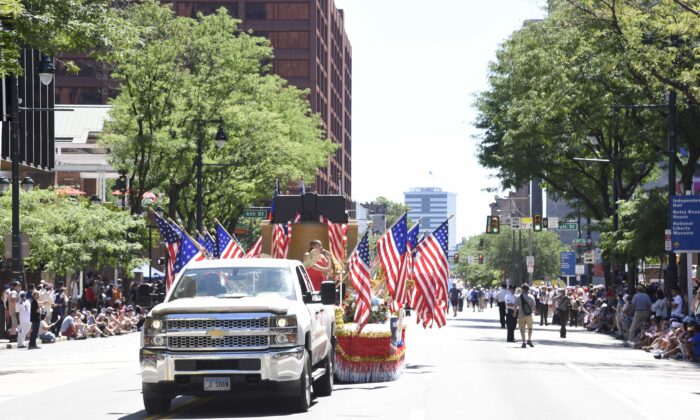 Salute to America Independence Day Parade was held in Philadelphia on July 4, 2022 to celebrate the 246th anniversary of the Declaration of Independence. (Leon Liu/The Epoch Times)
Regional News

Wawa Welcome America festivities in Philadelphia spanned 16 days, including free museum attendance, hoagie giveaways from Wawa, concerts, a fireworks finale over the Philadelphia Museum of Art, and more—all free to the public.

“Welcome America is just a great time for free family fun. People come together and share the excitement,” Laurie Bruce, Public Relations Manager of Wawa, the event sponsor, told The Epoch Times, “It’s about keeping people connected, and it just means a lot to be able to do that.”

“We’re happy, and everybody is getting together to celebrate,” Jim Kenney, the mayor of Philadelphia, told The Epoch Times, “If you see what’s going on in the country today, we’re so divided. And we need to come back together and kind of rethink what we’re all about.”

Freedom Is Not Free

People like Sergiy Kyslytsya, Ukraine’s ambassador to the United Nations, know how precious freedom is. He felt “exceptionally humbling” to be in Philadelphia, the birthplace of America, “at the very moment that when Ukraine fights for his freedom and independence, and when we have many people killed for the freedom.”

He told The Epoch Times: “It’s my honor today to read the parts of the Declaration of Independence in front of the free citizens of Philadelphia” during the ceremony, along with Iryna Mazur, honorary consul of Ukraine in Philadelphia.

“The United States has a very long, comparative long history of fighting for freedom, and offering the protection to all people who are persecuted in their countries, and becoming the second home to them,” said Kyslytsya, “And the very text of the Declaration of Independence is a testimony to the founding principles of this country.”

“Ukraine and Ukrainian people are a live example right now that freedom is not free,” Mazur told The Epoch Times. She said what Ukrainians are doing today is what the Americans did almost 250 years ago when they fought for their independence and freedom. “America is known for defending the principles of democracy and freedom since its creation.”

Mazur said to people in authoritarian countries like China and Russia: “Do not lose your chance to be free. This is your chance to take things into your hands and to show the world that you can be people of freedom.”

Both Kyslytsya and Mazur expressed great gratitude to America. “Thank you so much for your support, for your generosity, for your compassion, and for believing in Ukraine!” said Mazur.

The winner of the 2022 Celebrate Freedom Award with a $10,000 grant is Dr. Matthew Burke, the founder and executive director of “10 CAN, Inc.” or the Christian Adventure Network. It is a nonprofit charitable organization focusing on “saving heroes, raising the next generation of warriors, and restoring families through the great outdoors,” according to its website.

“My children see me as a hero, but I am no hero. I am just a humble servant of God and an American patriot. I’m passionate about helping others, reuniting our country, and getting kids into the outdoors,” Burke told the crowd after accepting his award at the ceremony.

As a veteran and an American patriot, Burke believes that this nation could not have come this far as a free country without the sacrifice of many patriots.

“We need to focus on what we have a commonality and instead of our differences,” Burke believes.