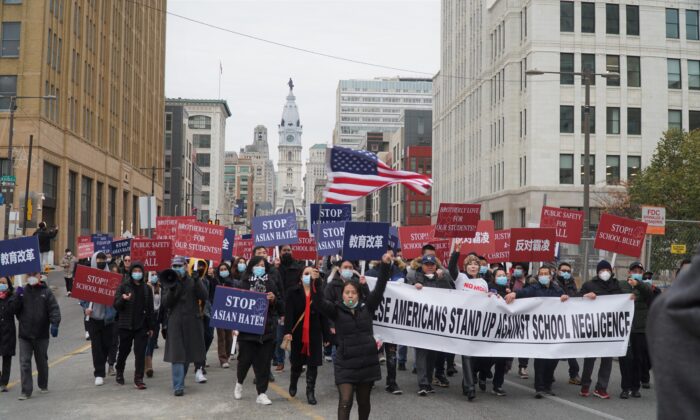 A “justice, safety, and an end to violence” rally was held in support of Christina Lu’s bravery and anti-violence behavior, in Philadelphia, on Nov. 30, 2021. (Lily Sun/The Epoch Times)
US News

On Nov. 30, a rally was held in downtown Philadelphia to support a Chinese-American high school girl’s bravery and anti-violence behavior.

About two weeks ago, Christina Lu, a senior at Philadelphia Central High school, was beaten on the subway after she tried to stop four African-American girls from yelling and cursing at three Chinese-American boys.

Christina’s family, along with hundreds of Chinese people from Philadelphia and New York, marched from the Philadelphia Municipal Services Building to the Philadelphia School District headquarters, holding signs and shouting “justice, safety, and an end to violence.”

The rally ended shortly after a few attendees talked to Kevin Bethel, chief of school safety at the School District of Philadelphia, about their concerns for the safety of Asian students.

Bethel spoke to The Epoch Times after the rally.

Bethel believes that it’s very important to improve the moral standard of the whole society—to end violence and crime.

“I was someone who was raised with high morals, to love thy neighbor, to protect thy neighbor,” Bethel continued. “We have to get back to our basics. And if we don’t do that, then we’re going to have a society that spins out of control, and see the things we’re seeing now.”

Teen Worthy of Being Called a Hero

After seeing Christina’s red, swollen, and bleeding left eye, many people donated to the GoFundMe campaign initiated by her mother. Within two days, over 7,700 people had donated nearly $700,000 to support her.

Bethel thinks that people should “give her a lot of credit.”

“There’s some that are built into her character; who she is—the person—and we should applaud all of that,” he said.

Mike Lu, Christina’s uncle, told The Epoch Times: “Christina is very brave. I just told the representative at the School District of Philadelphia that she was brave enough to come forward and the school should honor such a student.”

He said that Christina has a great passion for community. “She grew up loving public service activities from the age of 8. Just three months ago, at the end of August, she joined the Red Cross to help the poor in Honduras, [to visit] the felons in prison [and] communicate with them, and to help the children in the poor mountains.”

Students from Philadelphia Central High School also went to the rally to support Christina, holding signs that said, “Justice for Christina Lu.” Some expressed their admiration for Christina, even though they don’t know her personally.

Katie Cover, a 10th grader, said: “I think it’s extremely courageous. And … everyone in that situation should aspire to … do what she did.”

Cover thinks the rally helped them get closer to achieving their goal. “I think we are going to see positive changes within … SEPTA [subway system] and the school district hopefully soon, and that will be our goal,” she said.

Ha agreed: “We want to stop hate in general—[it] doesn’t have to be [hate against] Asian people by just black people or just people of color.”

Before the march, Christina spoke to the crowd that called her a hero, saying she is not. She said she is just an ordinary girl from an ordinary family who will continue to stand up against bullying and violence, and help people in need.