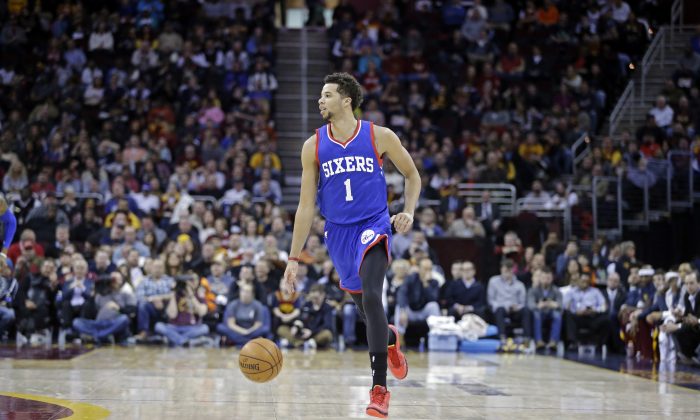 Philadelphia 76ers general manager Sam Hinkie spoke to reporters for the first time since September 2014 on Friday, addressing his team’s flurry of activity just prior to the NBA trade deadline on Thursday.

Williams was sent to the Bucks in a three-team deal that netted the Sixers two first-round draft picks, including the top-five protected Lakers pick that the Suns had from the Steve Nash deal.

Williams won Rookie of the Year last season and was putting up impressive statistics for the Sixers this season, although he also struggled with turnovers and shooting.

Hinkie appeared to point to that latter deficiency in the press conference. “Michael only left here because there was a way to move our program forward. He did nothing wrong,” he said. But he added, “For us to be among the best teams, you have to be able to shoot from 3.”

Hinkie said that teams have been trying to acquire Williams since his first NBA game last season.

“Only way we’ve moved him is if somebody blew us away,” Hinkie said, reported Tom Moore of the Philadelphia Inquirer. “Something came along. It’s very rare you get a chance to get your hands on what maybe can be a high lottery pick.”

Although the Lakers will likely keep their pick this season since they’re one of the worst teams in the league, the pick will likely be conveyed to the Sixers in 2016 since Los Angeles plans to chase free agents this summer upon Kobe Bryant’s return.

Hinkie spent less time addressing the McDaniels trade, but did deny that the fact that the forward had only signed a one-year deal was a big part of the reasons for trading him.

Hinkie emphasized the long-term nature of his moves and noted that most fans appear to be on board. “The feedback I’ve received from our fans is they understand we’re trying to do something great,” he said. “‘We have to make tough decisions. We will do it unflinchingly. We’re really focused on how do we find greatness.”

Another deal the Sixers completed was taking on JaVale McGee’s onerous contract in exchange for receiving a first-round pick. Hinkie said that McGee “may have a fresh start” in Philadelphia, but was acquired mostly because of the pick.

Yet another deal netted Philadelphia another pick but also Isaiah Canaan, a young prospect who will now be the team’s starting point guard. Hinkie said the team was planning to pick Canaan in the draft last season but he went one spot ahead of them.