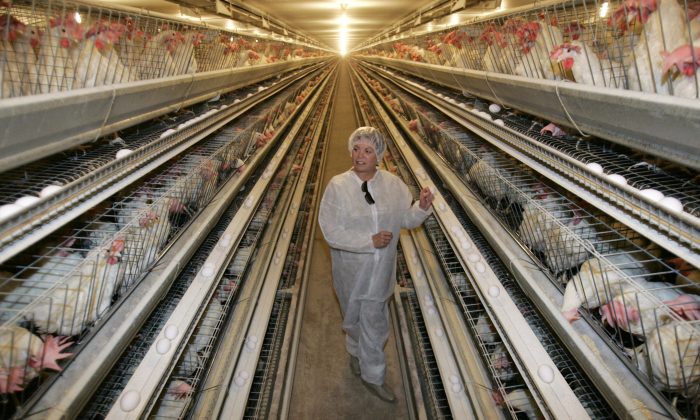 The Canadian Federation of Humane Societies says a new code of practice for egg farmers will help reduce the extreme stress suffered by egg-laying hens and give consumers some assurance about the term “cage-free.”

The National Farm Animal Care Council code released March 27 calls for producers to phase out the use of small, cramped cages for hens over the next 15 years and sets new care standards for the birds.

“The phase-out of barren battery cages is a huge win for Canada’s hens,” she said. “The timeline is much longer than we consider acceptable, but it doesn’t diminish how meaningful a change this is.”

Battery cages are so small that hens can’t walk or spread their wings for their entire lives. No more of these cages are to be built in Canada as of March 25.

Battery cages are so small that hens can’t walk or spread their wings for their entire lives.

The new code says at least 85 percent of hens should be housed in larger enclosures known as “enriched cages” or should be “cage-free” by 2031. Producers who can’t meet that target have another five years to meet the standard, but must give hens more and better living space in the meantime.

The code also spells out standards of care to ensure that hens can perch and forage for food, have boxes to nest in, and better care if they become sick or hurt.

Geoff Urton, who helped negotiate the changes on behalf of the federation, said without the new code the term “cage-free” that some consumers look for when buying eggs could be meaningless. He said some of the guidelines are among the most progressive in the world.

“It is probably the most significant animal welfare achievement, influencing the greatest number of animals, that Canada has ever had.”

The federation expects that half of egg-laying hens will be in cage-free barns within eight years.

Roger Pelissero, chairman of Egg Farmers of Canada, said the transition will be a challenge for some of the organization’s 1,000 regulated farmers as they look at upgrading their equipment.

Pelissero said the transition’s speed will partly depend on demand for eggs and the price consumers are willing to pay.

“Cage-free eggs will cost more money because it does cost more to produce that egg in that system,” said Pelissero, who has an egg farm near St. Ann’s, Ont.

Matt Rice of the international group Mercy For Animals said the new code is not acceptable because many egg-laying hens will continue to be housed in some form of cage for years to come.

“The NFACC has failed animals and Canadian consumers by continuing to allow egg-factory farmers to cram hens in barren wire cages for nearly their entire lives,” Rice said from LoS Angeles.

“They are some of the worst form of institutionalized animal abuse in existence that Canadian consumers don’t want and Canadian retailers are moving away from.”

Urton said the marketplace will be a key driver. A growing number of grocery store and restaurant chains have pledged to buy the eggs they need from cage-free producers.

“When you have these big food businesses come out and say, ‘Look, we are only going to put our brand behind humanely raised cage-free eggs,’ it sends a clear message,” Urton said.