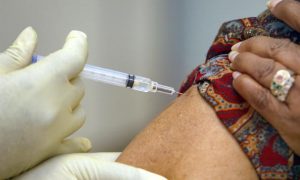 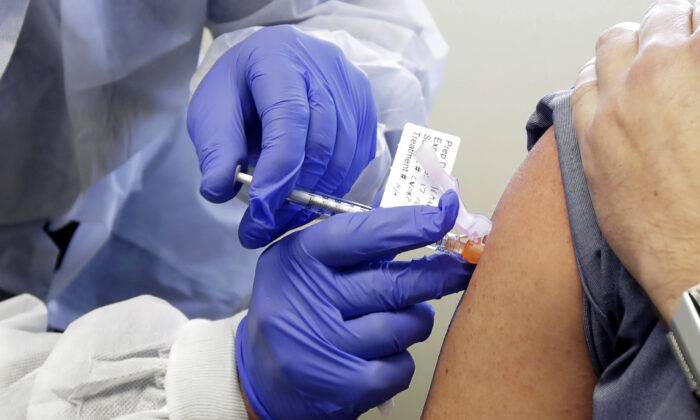 A subject receives a shot in the first-stage safety study clinical trial of a potential vaccine by Moderna for COVID-19, the disease caused by the new coronavirus, at the Kaiser Permanente Washington Health Research Institute in Seattle, Wash., March 16, 2020. Britain, the United States, and Canada accused Russia on July 16, 2020, of trying to steal information from researchers seeking a COVID-19 vaccine. (Ted S. Warren/AP Photo)
PUBLIC HEALTH INFORMATION

The third phase of clinical trials for the vaccine developed by Massachusetts-based company, Moderna, has begun, according to a news release issued by the National Institutes of Health (NIH) on Monday, July 27.

This marks the first American Company to advance to Phase 3 of clinical testing.

The investigational vaccine in question (mRNA-1273) is developed by Modern Inc., a biotechnological company based in Cambridge, Massachusetts, along with the National Institute of Allergy and Infectious Diseases (NIAID).

The clinical testing for the phase three of this vaccine is going to take place in clinical research sites in the United States, and approximately 30,000 individuals who do not have COVID-19 have signed up as adult volunteers for the trial.

According to the news release, these trial volunteers will be separated into two groups, and be issued either the vaccine or the controlled placebo. Two separate shots of either the 100 microgram of the vaccine or the placebo solution will be given to the volunteers, but they will be issued 28 days apart from each other. Moreover, this trial will be a blind one, where both the volunteers and the researchers will not know which one is given to whom.

“We are pleased to have started the Phase 3 COVE study. We are grateful to the efforts of so many inside and outside the company to get us to this important milestone. We are indebted to the participants and investigators who now begin the work of the COVE study itself. We look forward to this trial demonstrating the potential of our vaccine to prevent COVID-19, so that we can defeat this pandemic,” said Stephane Bancel, the CEO of Moderna, according to a statement.

Anthony S. Fauci, the NIAID director, indicated in the NIH news release that mRNA-1273 had gone through the previous stage, and through those earlier-stage tests, the vaccine was deemed safe and immunogenic, allowing the vaccine to move on to phase three testing.

The New England Journal of Medicine published a report on the vaccine regarding its earlier testing and indicated that though individuals experienced mild side effects such as fatigue, chills, headache, myalgia, as well as pain experienced in the area where the vaccine was injected, the vaccine was considered as safe.

“This scientifically rigorous, randomized, placebo-controlled trial is designed to determine if the vaccine can prevent COVID-19 and for how long such protection may last,” Fauci said, the news release indicated.

According to Francis S. Collins, the NIH Director, being able to develop a working vaccine against COVID and be able to distribute it to the public by the end of 2020 might be a far-away goal, but it’s something that the American people need to strive towards.

“The launch of this Phase 3 trial in record time while maintaining the most stringent safety measures demonstrates American ingenuity at its best and what can be done when stakeholders come together with unassailable objectivity toward a common goal,” Collins said.

“Thanks to President Trump’s leadership and the hard work of American scientists, the investigational vaccine developed by NIH and Moderna has reached this Phase 3 trial at record pace,” Alex Azar, the United States Department of Health and Human Services secretary said.