Coronavirus Vaccine Trial Opens in US With First Doses
0 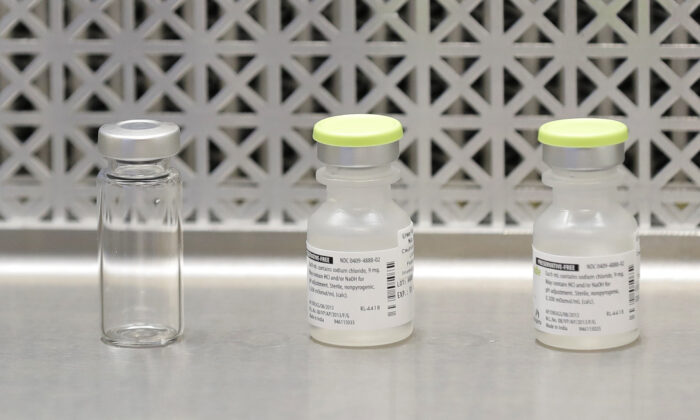 Vials used by pharmacists to prepare syringes used on the first day of a first-stage safety study clinical trial of the potential vaccine for COVID-19, the disease caused by the CCP virus, at the Kaiser Permanente Washington Health Research Institute in Seattle on March 16, 2020. (Ted S. Warren/AP Photo)
AMERICA

One of only five COVID-19 vaccines in human trials could enter phase two this summer as researchers expand the testing population to study the effect of the candidate in older adults.

Moderna’s vaccine has been tested in healthy adults from 18 to 55 years old across three doses: 25 micrograms, 100 micrograms, and 250 micrograms. The phase one study is being expanded and will now include testing the different dosing levels in two different groups: one group consisting of adults from 56 to 70 and the other with adults 71 years old and above.

Bancel said earlier this week that elderly people might need an annual vaccine shot because the immune system wanes over time.

Efforts to speed up the development of the vaccine got a boost on Thursday, when the Biomedical Advanced Research and Development Authority (BARDA), part of the Department of Health and Human Services, awarded Moderna up to $483 million. The funding will support later clinical trials as well as scaling up manufacturing of the vaccine and components necessary for making doses. Moderna will hire up to 150 new employees in the United States this year, primarily in clinical development.

“BARDA’s goal is to have a vaccine available as quickly as possible and preparing now for advanced stage clinical trials and production scale-up while the phase one is underway could shave months off development of COVID-19 vaccines,” BARDA Director Rick Bright said in a statement.

Once safety data and immunogenicity information is available, researchers plan on entering a phase two trial in the second quarter of 2020.

Researchers are hoping the vaccine demonstrates the ability to induce neutralizing titers, or antibodies that could block the CCP (Chinese Communist Party) virus from replicating on a consistent and significant basis. Looking at data from the trial, as well as data from other sources such as animal testing, researchers will pinpoint the antibody level that vaccines are expected to produce and see if it matches with the vaccine.

If the levels are reached, that would enable starting trials with clinical endpoints in late summer, Moderna officials said on the call.

Moderna’s vaccine is on an mRNA platform and was designed using the sequence of the CCP virus as opposed to containing the virus itself. It includes “encoding for a prefusion stabilized form of the Spike (S) protein,” according to the company.

The vaccine was quickly developed after China released the virus sequence in January and the first volunteers received doses on March 16. They were recruited through postings on Facebook and other websites.

The National Institutes of Health helped Moderna develop the candidate and the phase one trial is being run by Seattle’s Kaiser Permanente Washington Health Research Institute.

Phase one’s first cohort had 45 subjects. Phase two will have several hundred subjects; a phase three trial, tentatively slated for the fall, would include even more subjects and potentially include trials outside the United States.

The earliest Moderna will have an approved vaccine will be next year, Bancel has said, in line with projections from other companies.